Esbjerg Art Museum has added what might be described as two counter-rational works by the American concept artist Mark Dion to the museum’s collection of modern art. The New Carlsberg Foundation has supported the purchase. 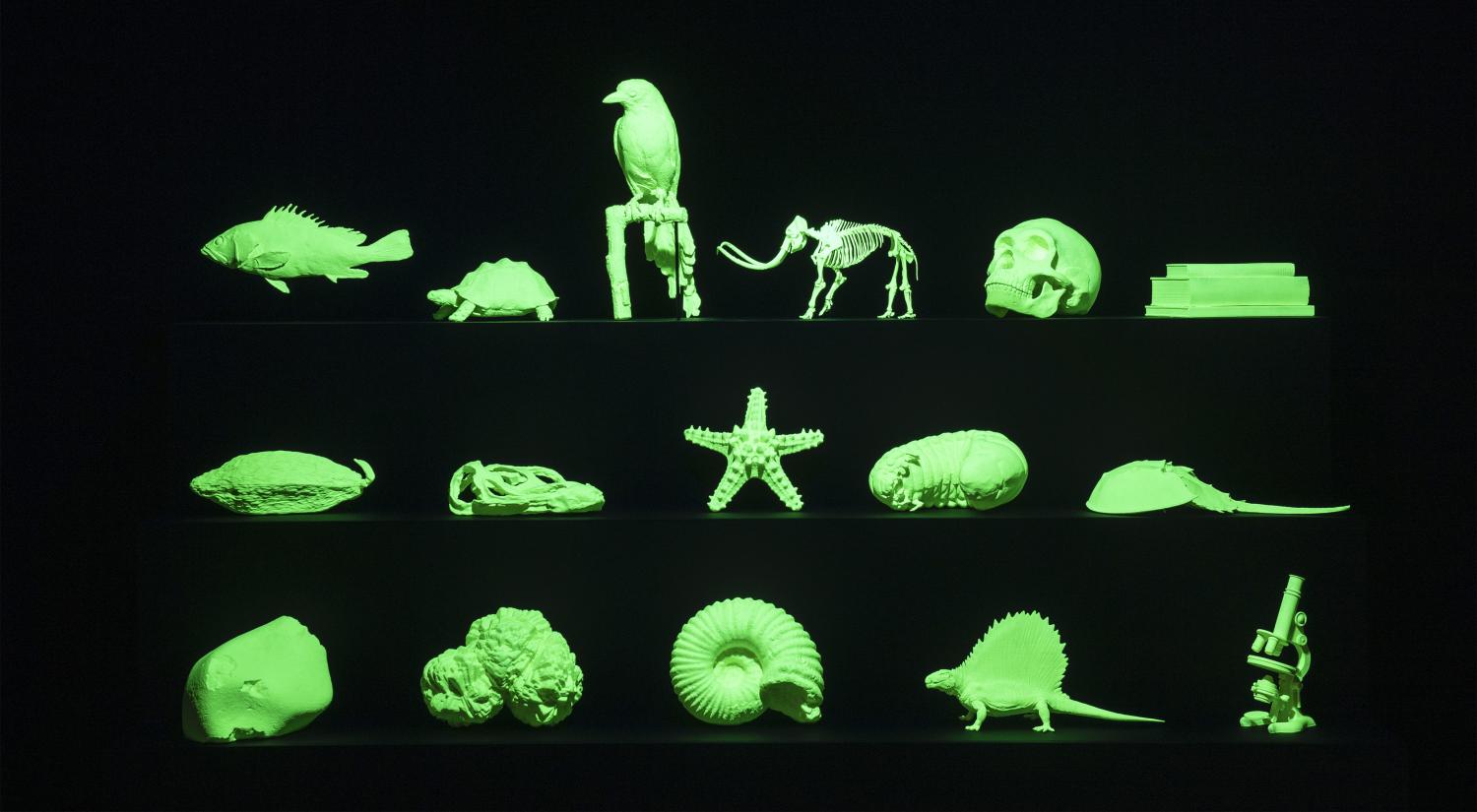 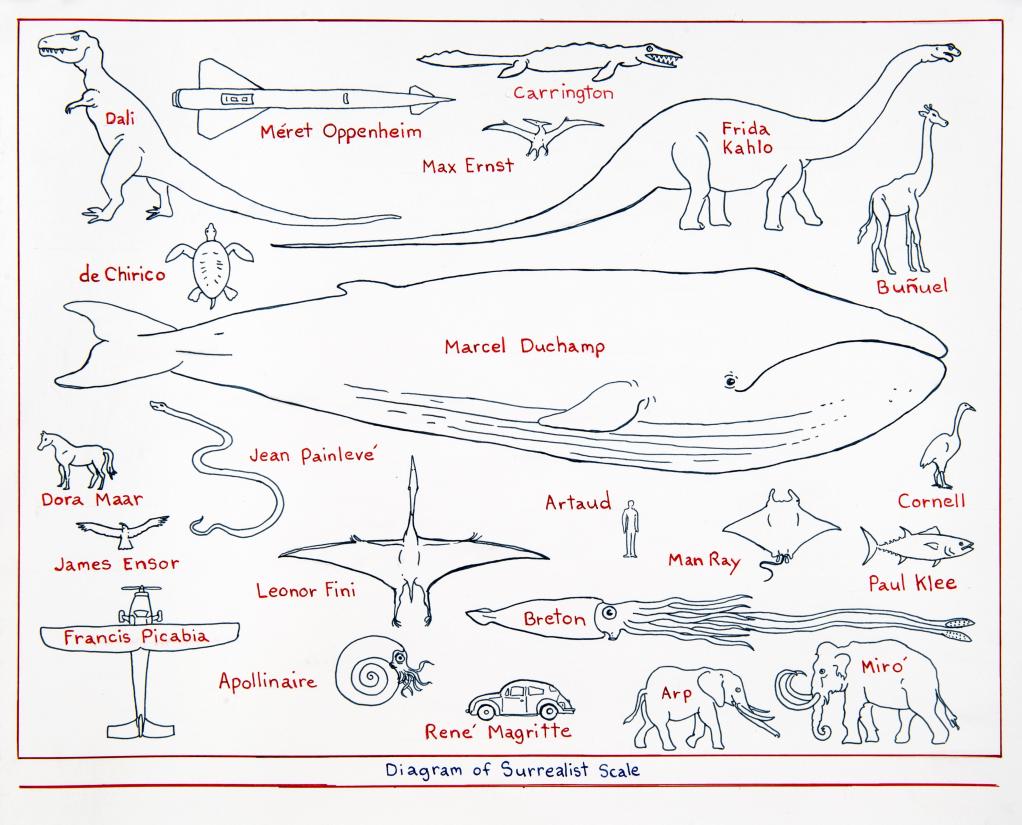 Mark Dion’s The Natural Sciences and Diagram of Surrealist Scale are playfully surrealist. In a humorous tone they point to our constant urge to categorize and systematize.

In The Natural Sciences we are presented with 16 3D-printed objects in the same fluorescent green, neatly organized into tidy rows. The collection is a mix of objects from flora and fauna as well as objects of a more material character: a tortoise, a microscope, a stack of books, a starfish, a bird – and more. Dion breaks with the notion of any natural hierarchy between the exhibits: in his glowing wunderkammer all things are treated as equals. The skeleton of a mammoth has the same size as a human skull. Dion draws on the wunderkammer as a format that is capable of establishing startling connections between the exhibited objects – and thus causing the viewer to wonder.

… a historical precursor of the museum

The wunderkammer, also known as the cabinet of curiosities, can be seen as a historical precursor of the museum: a collection of remarkable objects that were not categorized according to the disciplinary boundaries we rely on today. A microcosm that reflected the larger world outside through a collection of variegated objects. Dion uses the wunderkammer as a method to challenge taken-for-granted perceptions.

Dion again challenges with the notion of rational systematization in his drawing Diagram of Surrealist Scale. Here, extinct and contemporary animal species are juxtaposed with missiles and means of transport, each named after a well-known surrealist. Thus, Marcel Duchamp is a giant whale, Frida Kahlo a dinosaur, Méret Oppenheim a missile, and René Magritte an old VW bubble. The scale, too, is distorted. Dion enlarges in order to reinforce, diminishes in order to belittle and thus provokes reflections on what surrealists and scale actually have to do with one another in the first place. The diagram transcends any form of logic. The drawing’s use of red and blue pencil, commonly associated with accounting practices, adds a tongue-in-cheek comment about the market value of art.

Mark Dion (b. 1961, Massachusetts) is an American conceptual artist, who lives and works in New York. In his artistic practice he examines how museums, as public institutions, help shape our notions of knowledge, nature and history. He is known for experimenting with the cabinet of curiosities as an exhibition format and a comment on how we organize the phenomena that surround us. Dion’s work is represented in several leading museums, including MoMA in New York, Tate Gallery in London, Centre Pompidou in Paris and Seattle Art Museum. 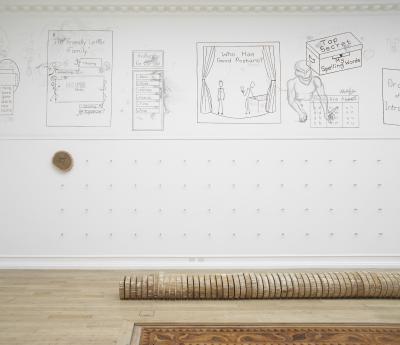 Thanks to a donation from the New Carlsberg Foundation, Kunsten Museum of Modern Art Aalborg recently added Event Horizon by the internationally acclaimed Slovakian artist Roman Ondak to its collection. Ondak’s piece is at once strikingly simple and complex in its profoundly sensuous way of giving the past renewed currency in the present. 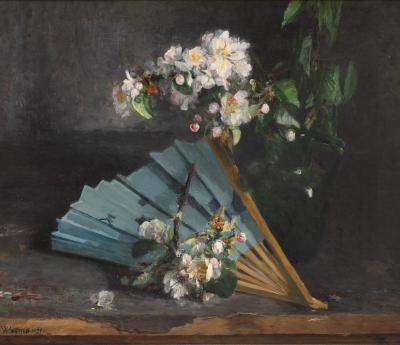 The Hirschsprung Collection has acquired a beautiful still life by Bertha Wegmann. The painting, which is already on display at the museum is a donation from the New Carlsberg Foundation.