SUPERFLEX in the DMZ

The Danish artist group SUPERFLEX marks the anniversary of the symbolic summit between North and South Korea with a playground installation in the demilitarized zone (DMZ) between the Korean nations. The installation, which was opened in connection with the Danish Crown Prince Couple’s official visit to South Korea, was realized with support from the Ministries of Culture in South Korea and Denmark and from the New Carlsberg Foundation. 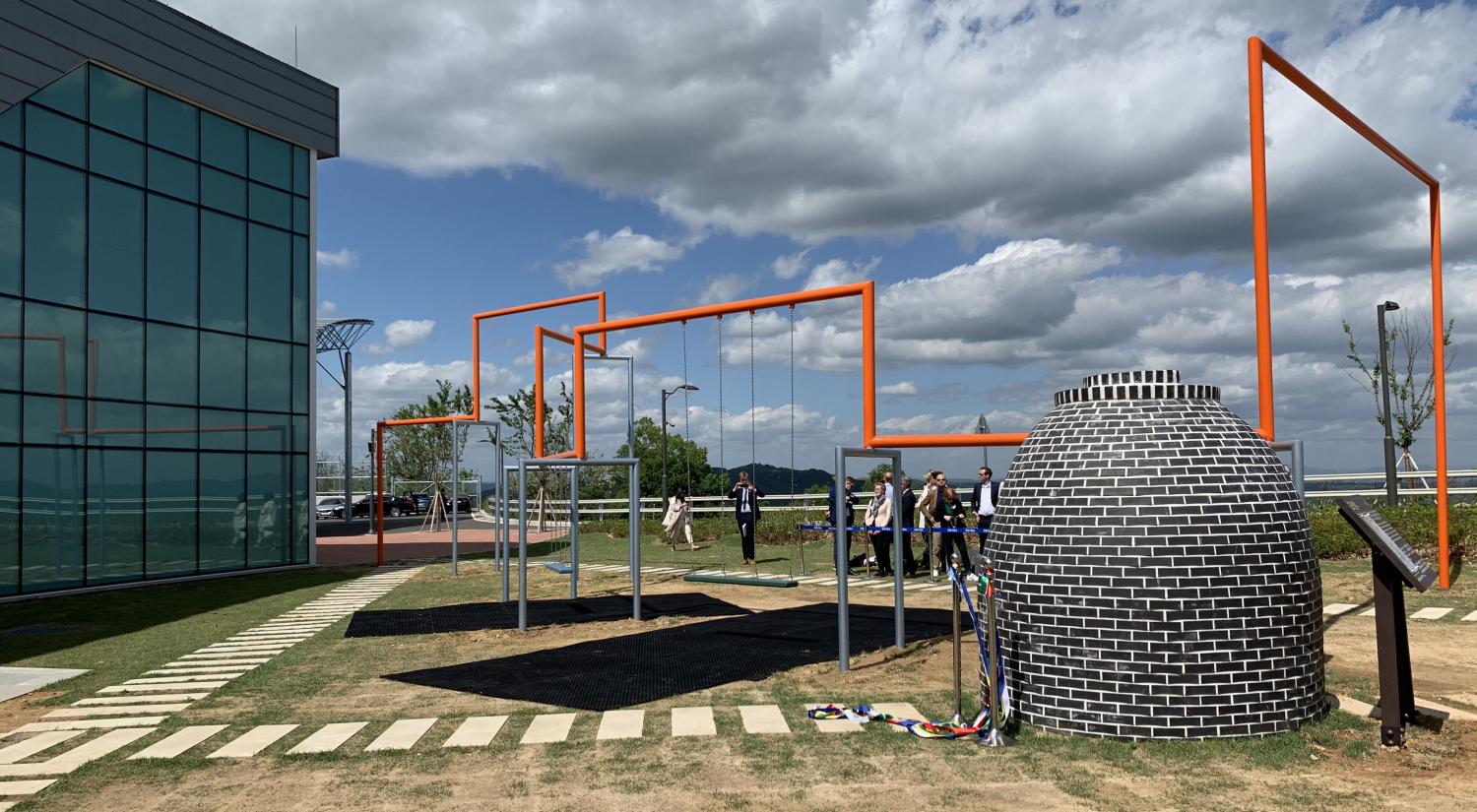 From the opening of One Two Three Swing! Photo: Carlsbergfondet 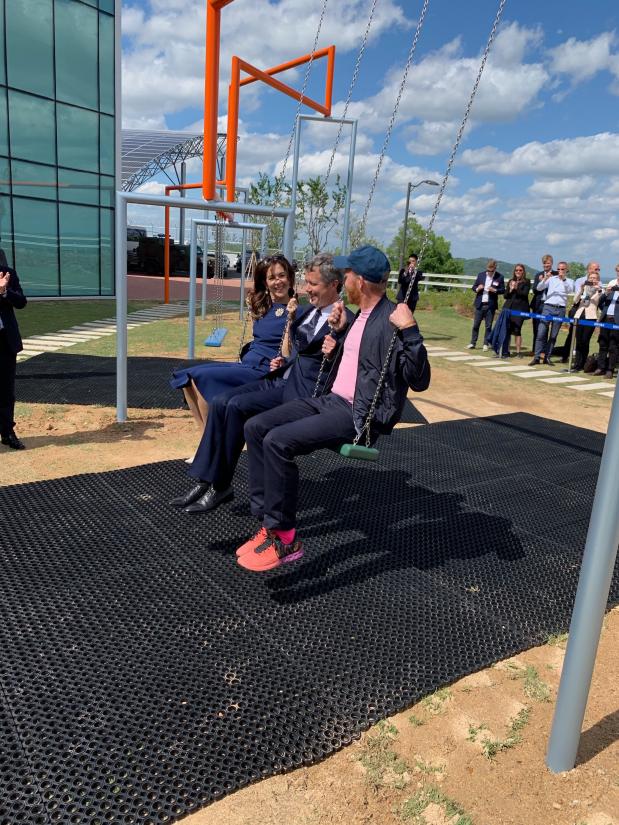 From the opening of One Two Three Swing! From left: Crown princess Mary, Crown prince Frederik and Jakob Fenger from SUPERFLEX. Photo: Carlsbergfondet 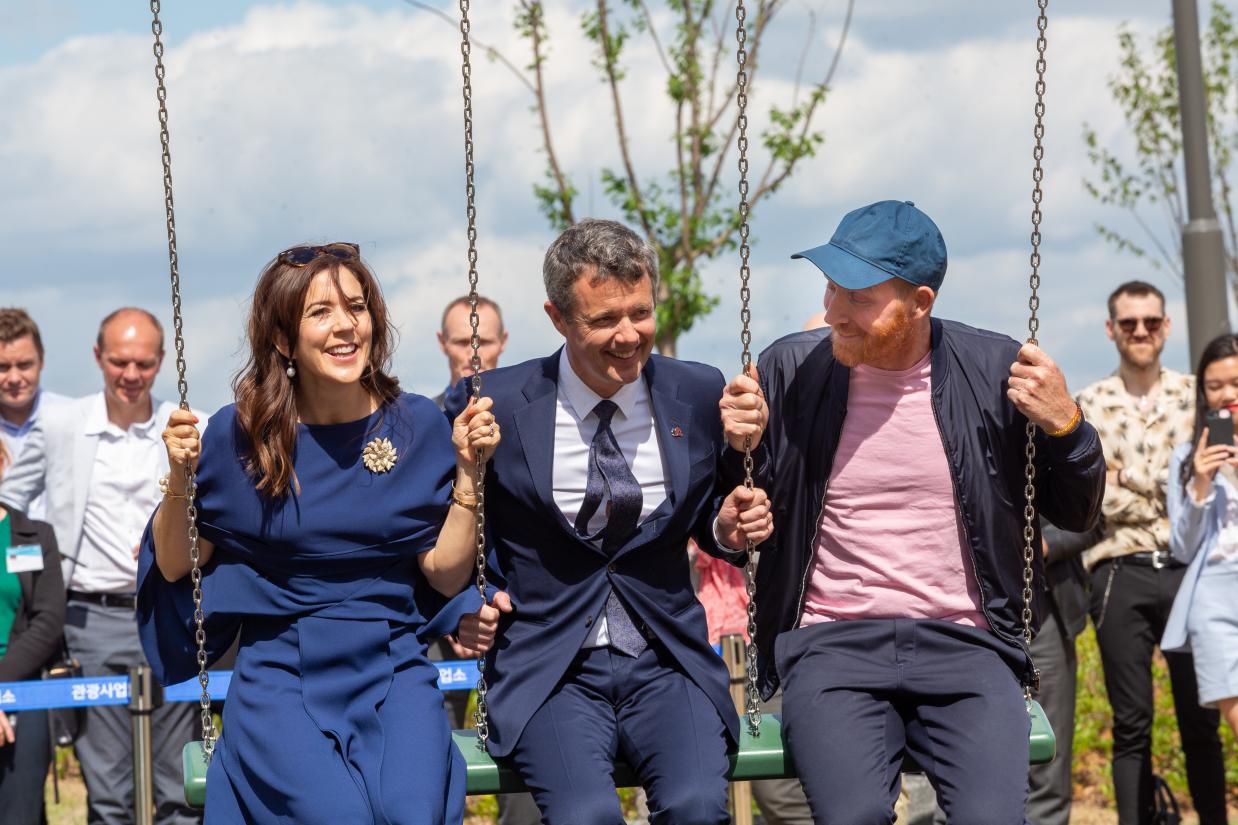 From the opening of One Two Three Swing! From left: Crown princess Mary, Crown prince Frederik and Jakob Fenger from SUPERFLEX. Photo: Embassy of Denmark, Korea

The political summit in Panmunjeom in 2018 marked the beginning of the continuing peace and reconciliation process between North and South Korea. SUPERFLEX’s contribution to the anniversary events is a playful activist invitation to build communities and change the world through collective movement and play. A message that takes on particular symbolic and physical resonance in the Korean peninsula where the Korean people has been divided, since the end of the Korea War in 1953, by the world’s most heavily militarized border.

The installation One Two Three Swing! was first shown in 2017 in one of the world’s most prestigious and physically monumental art venues: the iconic turbine hall of Tate Modern in London. Since this debut, SUPERFLEX has recreated the installation in other locations around the world, including in Copenhagen. The version that is currently presented at Dorasan Station in the DMZ on the South Korean side of the border consists of a number of three-person swings connected by a sprawling system of orange pipes.

Dorasan Station is the last stop in South Korea on the Gyeongui Line, the railway line originally built to tie south and north together. Due to the political meltdown between the two nations, the station is not currently in use. With its collective swings One Two Three Swing! confronts the apathy and stagnation in Dorasan and the rest of the DMZ by inviting people to form new partnerships and activate new communities and a new energy capable of challenging the status quo.

The swings form a playground at Dorasan for the next two years, and plans are underway to expand the installation to other parts of the DMZ, hopefully including the North Korean side. With One Two Three Swing! SUPERFLEX has certainly made its own, unconventional contribution to helping North and South Korea swing the current situation around.

One Two Three Swing! was opened during the Danish Crown Prince couple’s official visit to South Korea to mark the 60th anniversary of diplomatic relations between South Korea and Denmark. The Crown Prince couple’s visit also marked the official beginning to the 2019 Year of Culture – a joint project with cultural activities in both countries. One Two Three Swing! was thus realized with funds from both the South Korean and the Danish Ministry of Culture. The project has also received support from the New Carlsberg Foundation, which also supported SUPERFLEX’s large exhibition at Tate Modern in 2017.

The artist group was formed in 1993 by Jakob Fenger, Bjørnstjerne Christiansen and Rasmus Nielsen. From the outset, SUPERFLEX has confronted contemporary reality by concrete means. With projects revolving around social and collective phenomena the group engages social and political situations head-on with projects spanning from biogas plants, beer and soft drinks to film and installations.