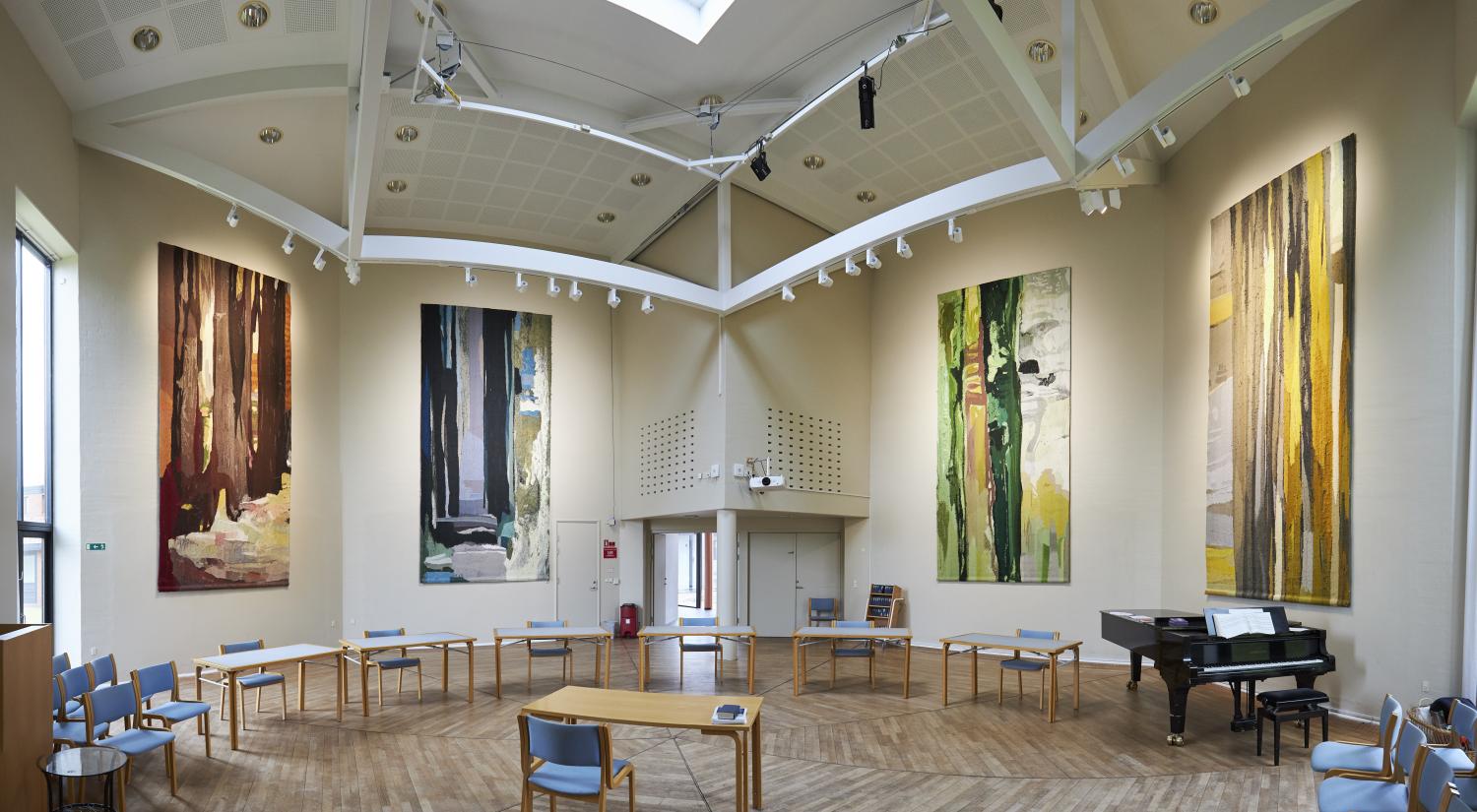 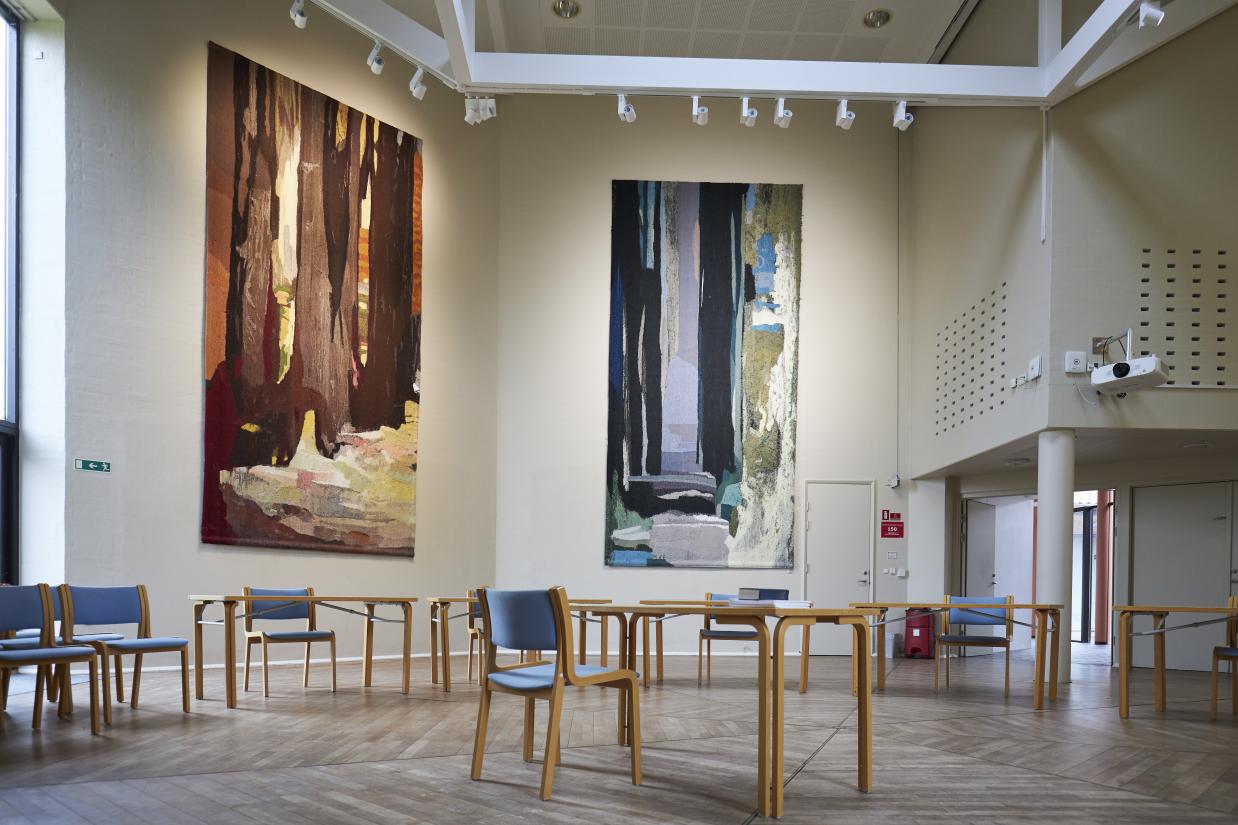 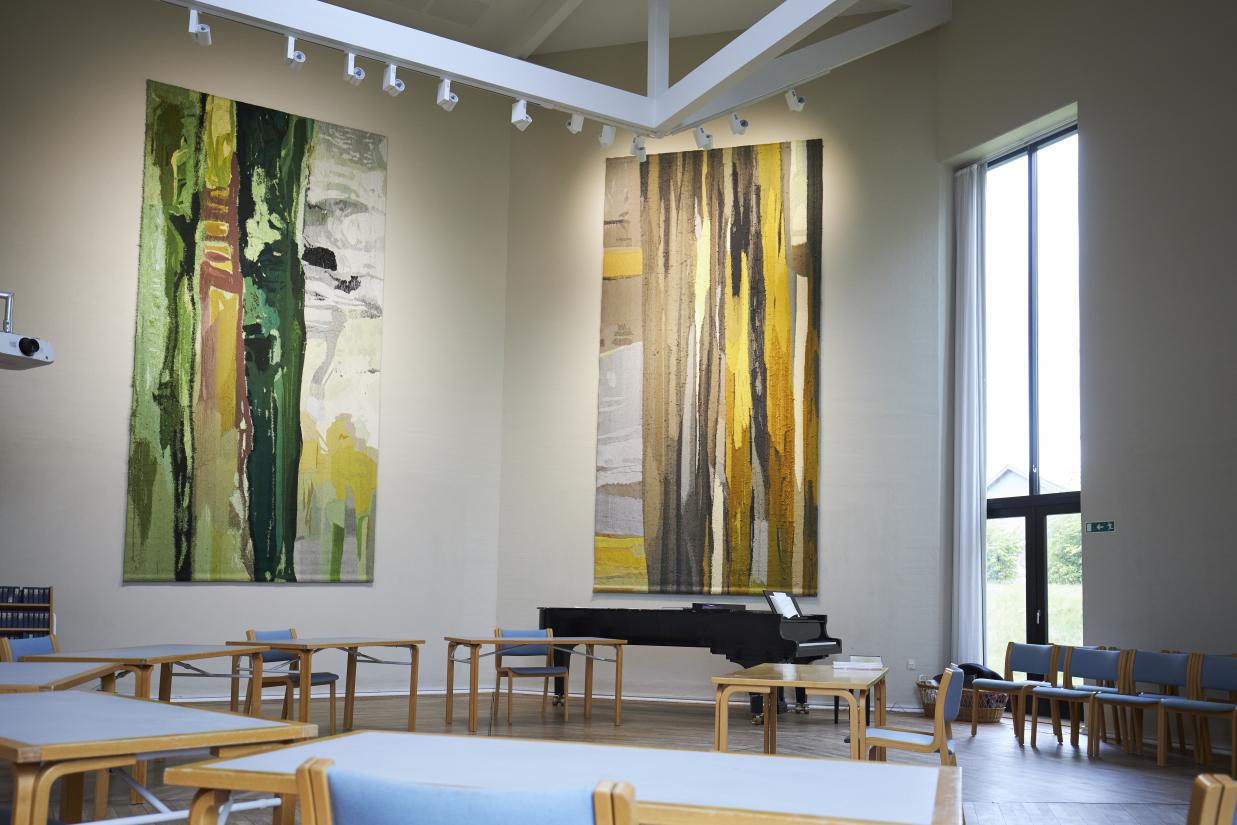 With the old Cistercian church as its nearest neighbour, Løgumkloster Højskole has always had a strong emphasis on culture, art and Christianity. In 2010, the folk high school applied for funding for a permanent decorative project for its common areas to mark its focus on art and culture as well as the occasion of its 50th anniversary.

The New Carlsberg Foundation approved the application and selected the artist Maja Lisa Engelhardt, who spent the next three years translating her sketches into a suite of woven tapestries in collaboration with the weaving studio Atelier 3 in Paris. When the large project was finally completed, the school had declared bankruptcy, and so the suite could not be hung at the school as intended. Instead, it was exhibited in France and, subsequently, at Roskilde Cathedral in 2015.

The four wall hangings were created specially for the school’s lecture hall, a characteristic octagonal room with a high ceiling. The octagon, which approaches a circular form, inspired the artist to create a suite representing a cyclical movement. Engelhardt has often portrayed Danish nature in her work, and for this project she chose the four seasons as her topic. The Danish climate and the four seasons are characterized by the colours respectively associated with spring, summer, autumn and winter.

Accordingly, the project was divided into four monumental tapestries, one for each season. Each tapestry measures 5 x 2.5 metres, and the suite may be considered the artist’s principal accomplishment in the textile genre.

A symbol of growth

The lines of the lecture hall at Løgumkloster Højskole strive upwards. The dimensions of the tapestries echo the shape of the tall windows, thus creating an interplay that extends and accentuates the architectural character of the room. The tree trunks in the woven wall hangings, reminiscent of caryatids or columns, appear as symbols of growth. This effect is heightened by the architecture of the room, where the wooden ceiling construction too may be seen as a reference to nature and the changing seasons.

Maja Lisa Engelhardt (b. 1956) graduated from Det Fynske Kunstakademi (The Art Academy of Funen). Since her debut in 1985 she has exhibited both in Denmark and abroad. She has created a large number of decorative projects in churches, including glass mosaics for Stoense Church in Tranekær (2005), the rug Jakobs Kamp med Englen (Jacob Wrestling With the Angel) for the chancel in Skelund Church in Hadsund (1999) and the bronze door for Viborg Cathedral (2012).