The Danish avant-garde does not surrender

In cooperation with the New Carlsberg Foundation, Centre Pompidou has acquired an important piece by Asger Jorn. 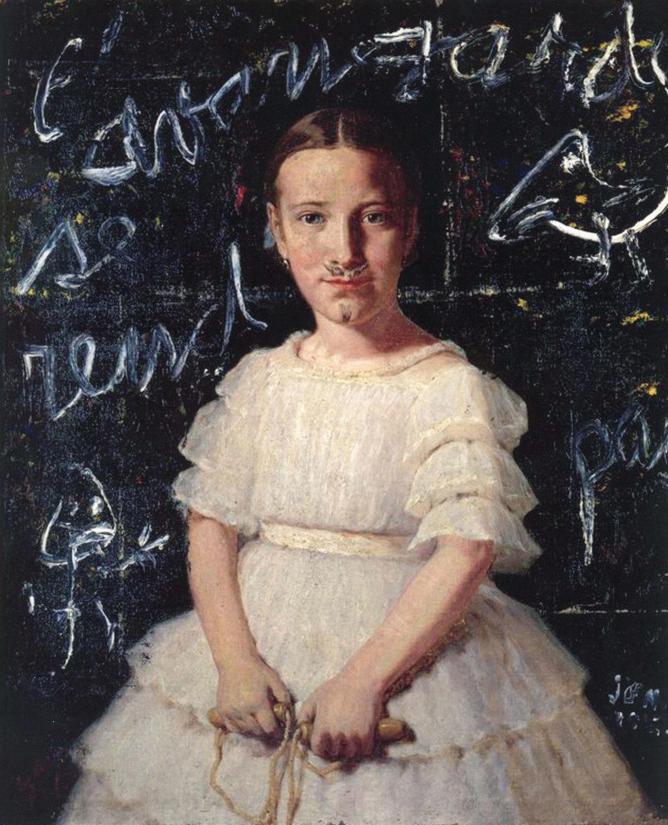 In 1959–1962 Asger Jorn created a series of modified works by painting on top of old, kitschy paintings and reproductions he had found in flea markets. One of them is the famous L’avant-garde se rend pas (The avant-garde does not surrender), which is now included in the French museum’s growing CoBrA collection.

Humorous modifications
The original painting, which was modified by Jorn, depicts a young girl in a white confirmation dress. She is clutching a skipping rope and fixing the audience in her gaze with a vague smile. Jorn embellished this picture, an amateur version of a classical 19th-century academic portrait, by painting a moustache and goatee on the girl’s face and scrawling the words ‘L’avan-garde se rend pas’ across the black background.

L’avantgarde se rend pas is often interpreted as a paraphrase on Marcel Duchamp’s work L.H.O.O.Q, in which the French artist added a moustache and goatee to a reproduction of the Mona Lisa. Today, expert opinion varies as to why Jorn did these modifications and what meaning they hold, but nevertheless the paintings continue to attract interest from both scholars and art audiences.

‘It is an absolute masterpiece, which has been featured in the most important Jorn exhibitions, including the landmark retrospective [Asger Jorn – Restless Rebel] staged by Dorte Aagesen at the National Gallery of Denmark in 2014. Indeed, Jorn scholars consider it the most radical example of his modification art,’ comments Bernard Blistène, director of Centre Pompidou.

The Danish-French connection
Throughout his life, Asger Jorn maintained a connection to the Paris art and culture scene, where he began his career as an artist in 1936 under Fernand Léger. Later, he became involved in the Situationist movement spearheaded by the writer and theorist Guy Debord. Paris was also the site of the first showing of L’avant-garde se rend pas – at Galerie Rive Gauche in 1962.

Today, Centre Pompidou is working to expand its representation of Danish avant-garde art, especially with regard to the Danish branch of the CoBrA movement, says Bernard Blistène:

‘We have been able to expand the collection in recent years, adding pieces by Egill Jacobsen and Carl-Henning Pedersen, among others. The donation of this piece by Jorn marks an important addition to the Danish-French connection and, not least, sends a clear signal to the international art scene of Jorn’s central position.’