Works of art in dialogue

Playful works of art by Nanna Abell and Jeppe Hein have taken up occupancy in the modern architectural setting of University College Copenhagen, Campus Carlsberg. With bright signal colours, B-LOONY and Mirror Balloons add both visual and sensuous statements to the open concrete spaces. 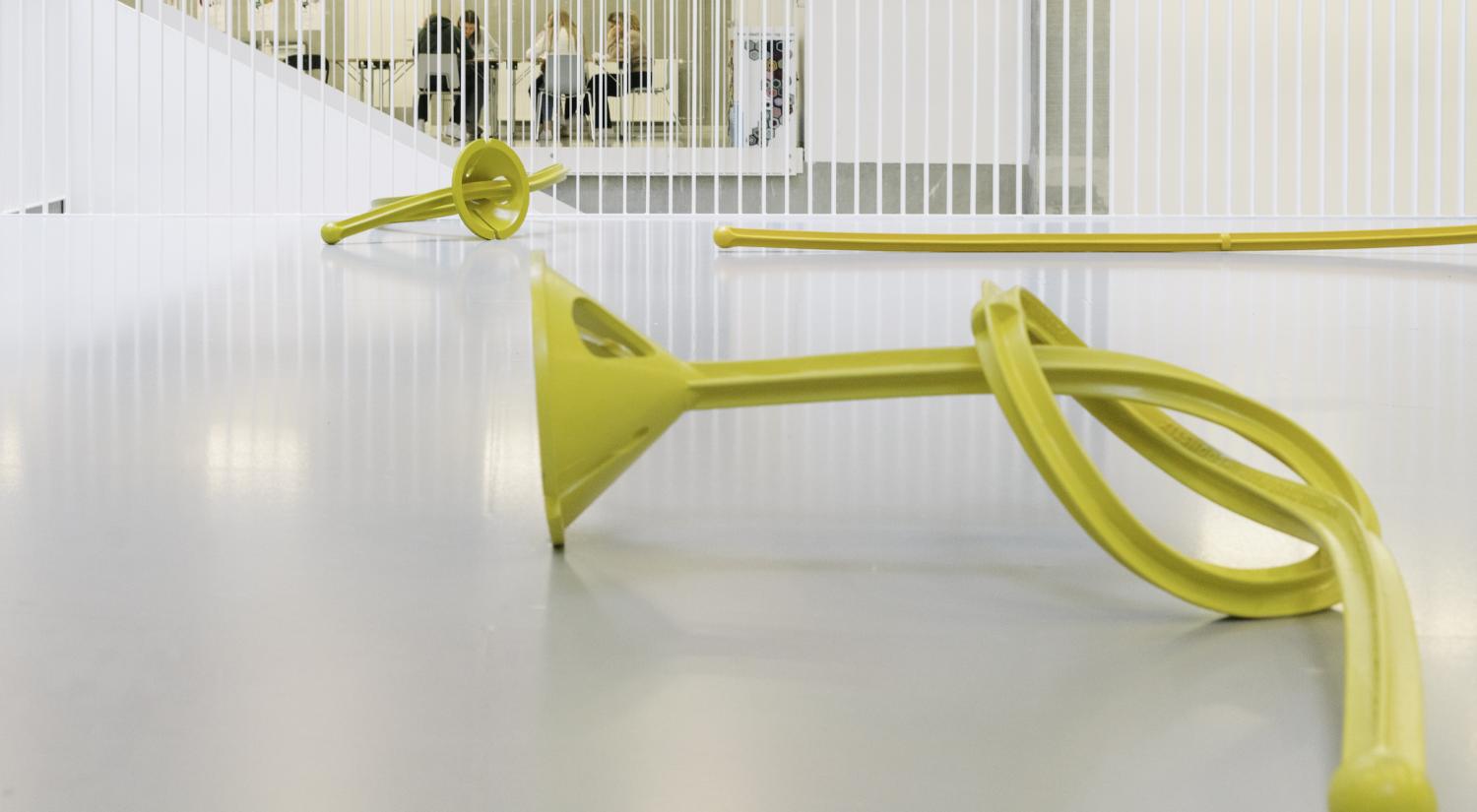 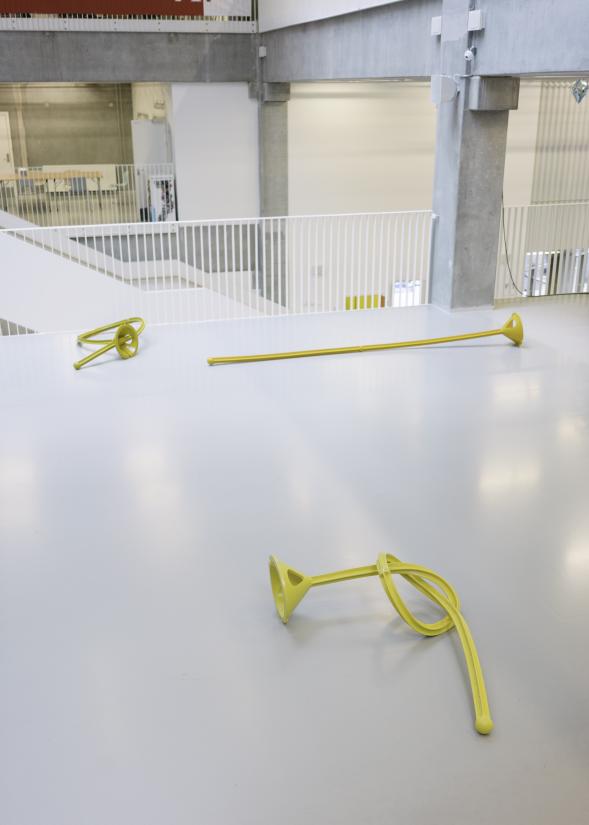 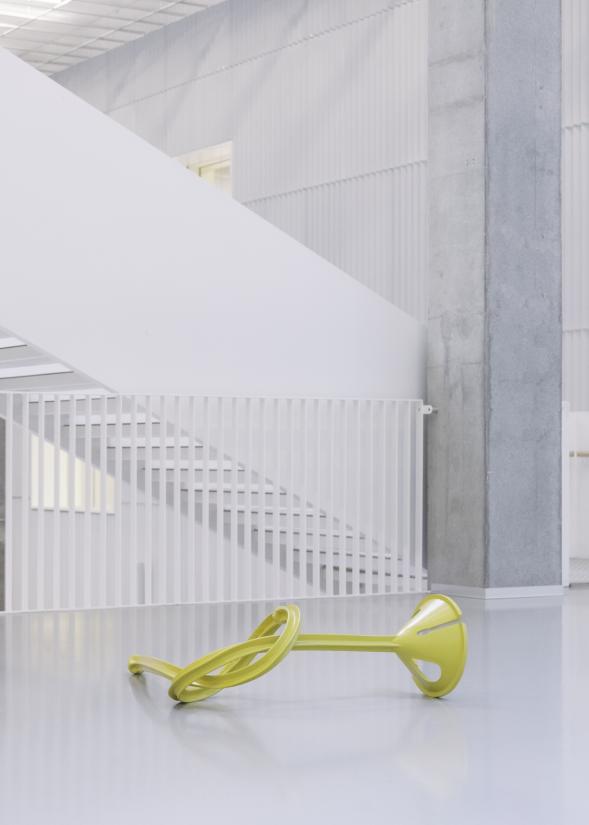 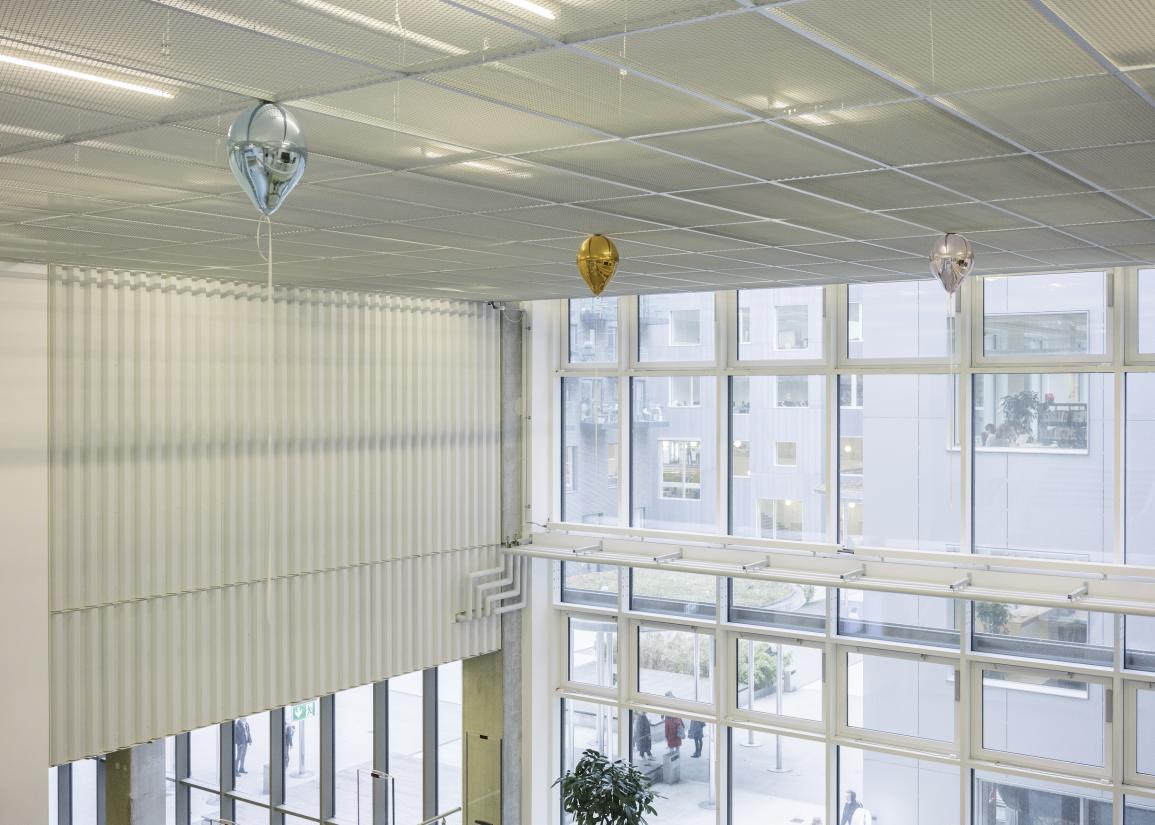 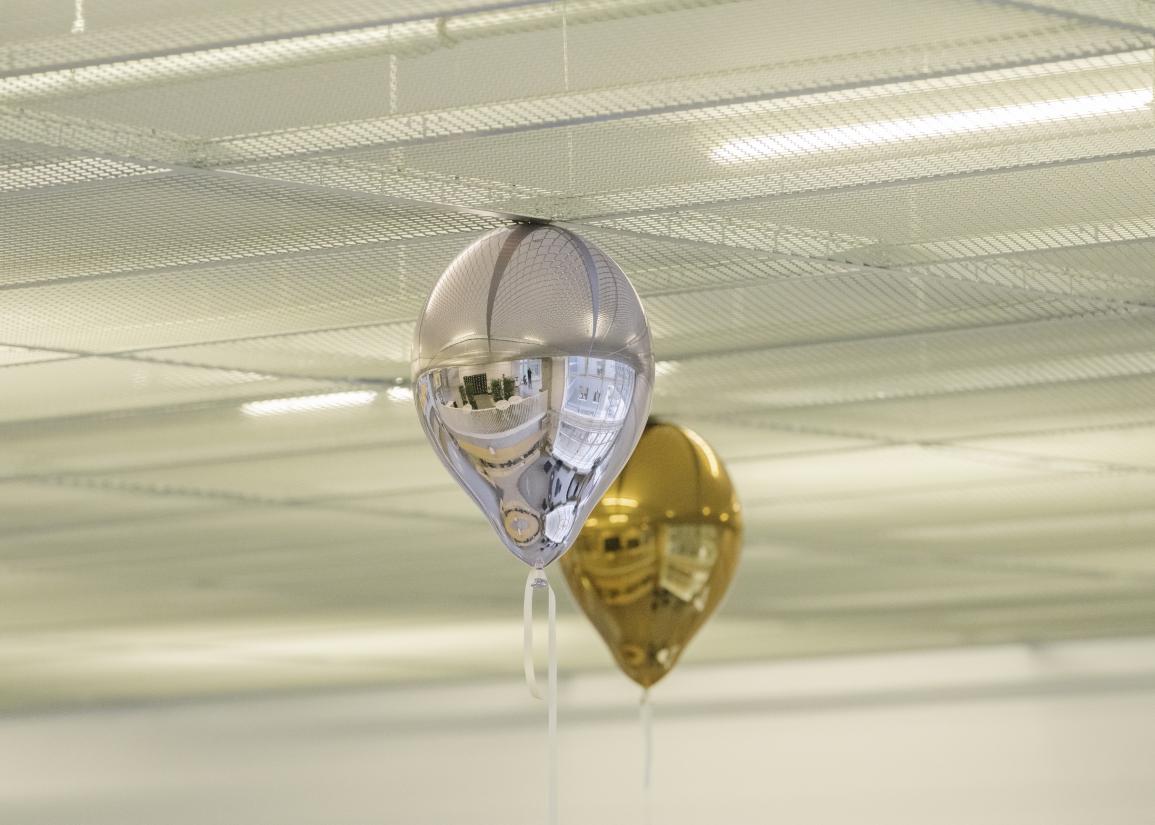 Nanna Abell’s and Jeppe Hein’s colourful works of art engage the architectural space at Campus Carlsberg in dialogue, acting as a sort of spatial markers or landmarks in a big white cube. Here, they draw attention to differences in scale in the interior architecture with its open floors that allow a view of multiple levels at once. They also give rise to new perceptions of scale that make the users aware of their own bodies in this space. The pieces were donated by the New Carlsberg Foundation.

Three oversize balloon sticks lie tossed aside on the pale grey floor. Two of them are twisted into knots, while the third is stretched-out in its full length. The objects appear at once familiar and alien. It takes a moment to grasp what they are. But you might recognize them from the Tivoli Gardens, where children hold balloons mounted on these kinds of sticks. Nanna Abell plays with recognizability and scale. By blowing up a small, insignificant everyday object she transforms an overlooked item into an object in space that is impossible to ignore. With this, she points to the fleeting, childish pleasures of our affluent society that do not meet an actual need. However, Abell’s balloon sticks are not in themselves the result of the consumer society’s mass production. They were created in a sensitive and painstaking process, hand-pinched in a scale of 1:10 and then cast in bronze and lacquered yellow.

Lift your gaze and experience the space around you! Hanging from the ceiling are three colourful balloons: blue, yellow and violet. Their exteriors are smooth as a mirror. And like a fish-eye lens, they reflect the space around them. We feel a sense of child-like joy and surprise when we notice them. We pause and are momentarily pulled out of our mundane everyday life. Or maybe we look up to make sure the balloons are still there. In any case, Jeppe Hein certainly seems to reward us for lifting our gaze from our normal somnambulant way of moving through a place. With this, he suggests that we stand to gain from being fully present and awake.

The two works of art engage each other in dialogue. Abell’s balloon sticks and Hein’s balloons establish a relationship extending from floor to ceiling. Although Abell’s sticks have political connotations, while Hein’s purpose is more contemplative, they both connect with a childish quality. Nanna Abell (b. 1985) graduated from the Royal Danish Academy in 2013. With an academically based approach she works with sculpture, photography, installations and scent. Jeppe Hein (b. 1974) graduated from the Royal Danish Academy in 1997 and later studied at the Hochschule für Bildende Künste – Städelschule (Academy of Fine Arts) in Frankfurt before going on to work for Olafur Eliasson. His works are often interactive and encourage the viewer to engage in movement, play and reflection.