A Winter Night at Kunsten

Julie Nord’s free-wheeling fantastical pictorial narratives with their abundant ornamentation are a celebration of the non-rational and quirky. They rattle our notion of the familiar world and bring a sinister feel to the places where we feel most safe and secure. With support from the New Carlsberg Foundation, Kunsten Museum of Modern Art Aalborg now adds Nord’s principal work A Winter Night to its collection. 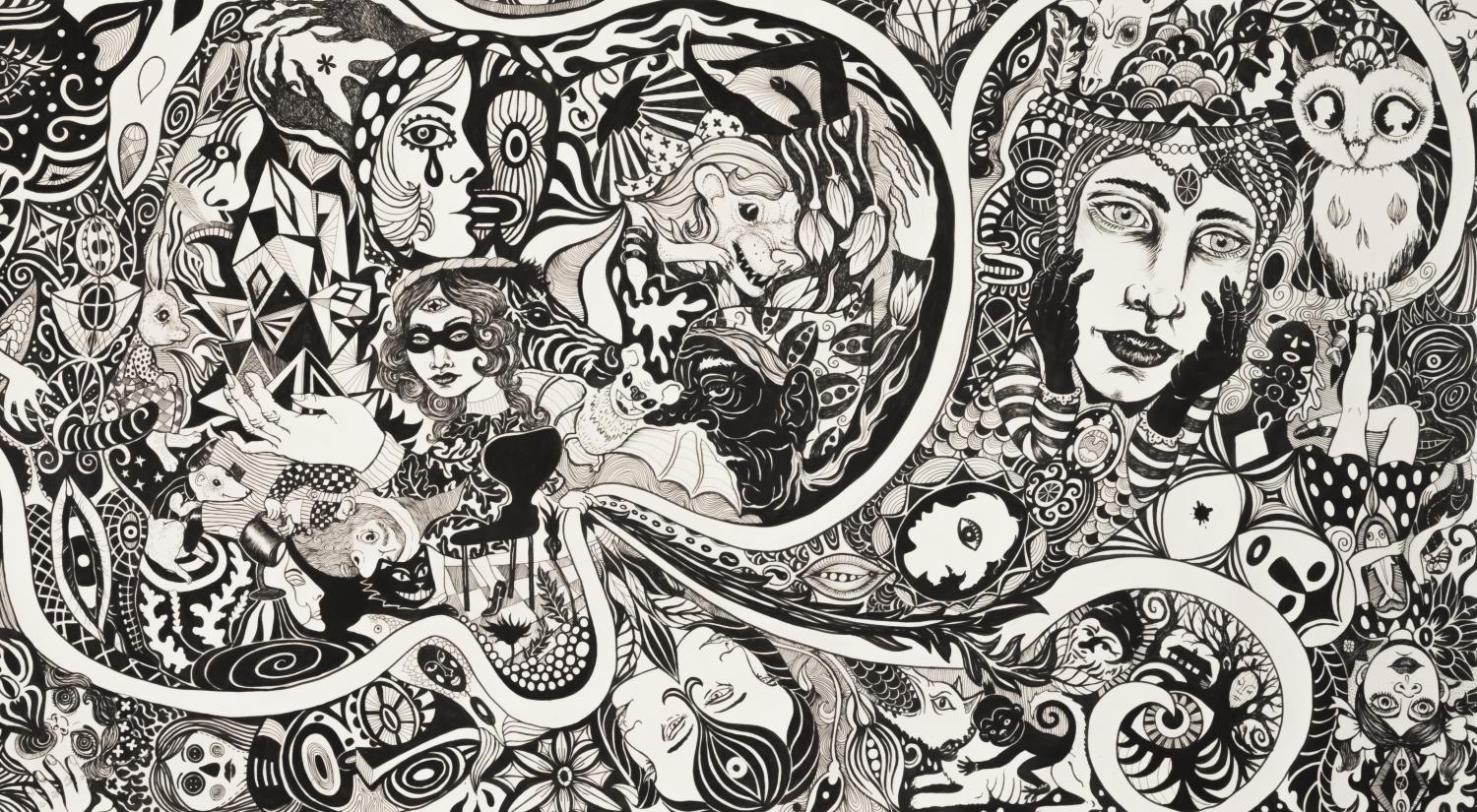 In her figurative works Julie Nord establishes a borderland between fiction and reality, the fantastical and the conformist, the individual and the world. A Winter Night from 2017 exemplifies the ability of her works to combine the safe and familiar with the unsettling and alien.

The 1 x 3-metre automatic drawing in black Indian ink and pencil is an example of what Nord herself describes as ‘a bustling drawing’. She starts in one corner, and then patterns and images spring forth during the process. The drawing contains some of the familiar figures from the artist’s characteristic universe as well as figures that appear spontaneously, all moving among each other with almost manic energy. In an effect contributing to this feeling of dynamic movement, as soon as a meaning arises, it is disrupted by another, which similarly refuses to be pinned down before a new motif appears. In a mesmerizing stream-of-consciousness flow, the large image surface pulls the viewer in.

The botanized forms and the overwhelming flow of images evoke English Gothic Revival architecture and its affinity for complex lines and organic ornamentation. A similar feel is echoed in Nord’s universe, causing the eye to meander from one hallucinating ornamental element to the next.

Peeling off the facade

With its insistent fictive pictorial universe Julie Nord’s paper art sparks immediate recognition, but a second look reveals a morbid quality to the delicately drawn figures. Pretty, doll-like little girls with bows in their hair and long eye lashes were once a favourite image in her world alongside bustling patterns and flowering vines that hide both skulls and carnivorous plants. While Nord’s works may at first glance seem to represent a profoundly feminine or girly universe, they soon reveal themselves as anything but saccharine. Nord is drawn to the cracks in these familiar idyllic images. The more idyllic, the greater her desire to peel off the facade.

Julie Nord (b. 1970) graduated from the Royal Danish Academy of Fine Arts in Copenhagen in 2001. Her main media are pencil, watercolour, felt-tip pen and Indian ink on paper. Her richly detailed works on paper have a particularly graphic, illustrative character. She draws inspiration in part from horror films and illustrations in children’s books, and even if the images may seem to border on the absurd, they possess a strong realistic quality stemming from the often familiar situations they depict. Nord has received numerous awards and grants, and in 2019 she was awarded the New Carlsberg Foundation’s artist’s grant.