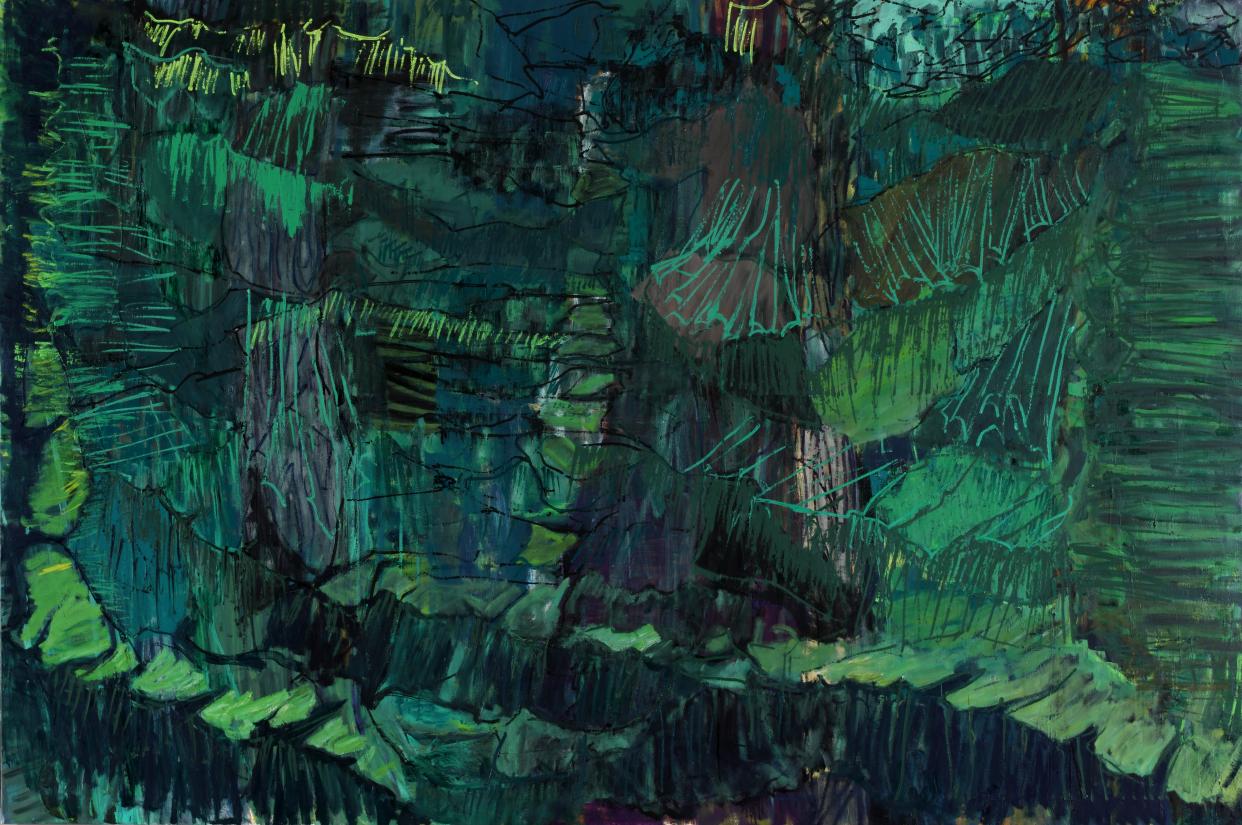 Kirkeby’s painting contains an inherent power that almost eludes language. In this painting, one is overwhelmed by a sea of luminous shades of green. In Kirkeby’s work, the light does not come out of nothing. He seems to draw it out of the dark, from the many underlying layers of colour that are only partially visible.

Kirkeby’s lifelong interest in nature and his training as a geologist are present in this picture. The structures are reminiscent of tectonic plates and cross-sections of geological strata or, as suggested by the title, softly lapping waves of green. Colour fields in varying shades of green run through the picture in chain formations, some of them appearing to be moving downwards, sideways or upwards. This brings a distinct sense of tension to the painting, pulling it in different directions. Kirkeby uses his characteristic shading to tie the fields together. The areas of shading define and encircle certain areas and also bring an overarching sense of cohesion. Using a few, simple colour details – lilac, a bit of orange and a dazzling yellow – he intensifies the green.

The Art Institute of Chicago

The Art Institute of Chicago was founded in 1879 as both a museum and an academy of art. Today, the institute has a permanent collection of almost 300,000 objects, distributed among the 11 different departments of the museum. With a floor space of almost 90,000 square metres, the museum is the second-largest in the United States, surpassed only by the Metropolitan Museum of Art in New York. Among the principal works of art in the modern art department are works by Jackson Pollock, Eva Hesse, David Hockney, Ellsworth Kelly, Cindy Sherman, Cy Twombly and Gerhard Richter.

Per Kirkeby (1938–2018) is one of the most significant representatives of modern Danish art. He graduated as a geologist in 1964 and went on numerous trips and expeditions, including in Greenland, Central America and Norway. Concurrently with his science studies, he attended Den Eksperimenterende Kunstskole (The Experimental Art School), also known as Eks-skolen (The Ex School) in Copenhagen. His eye for geology is a recurrent theme in many of his works, which are represented in collections the world over, including at the Centre Pompidou in Paris, MoMA in New York and Tate Modern in London.

The Art Institute of Chicago