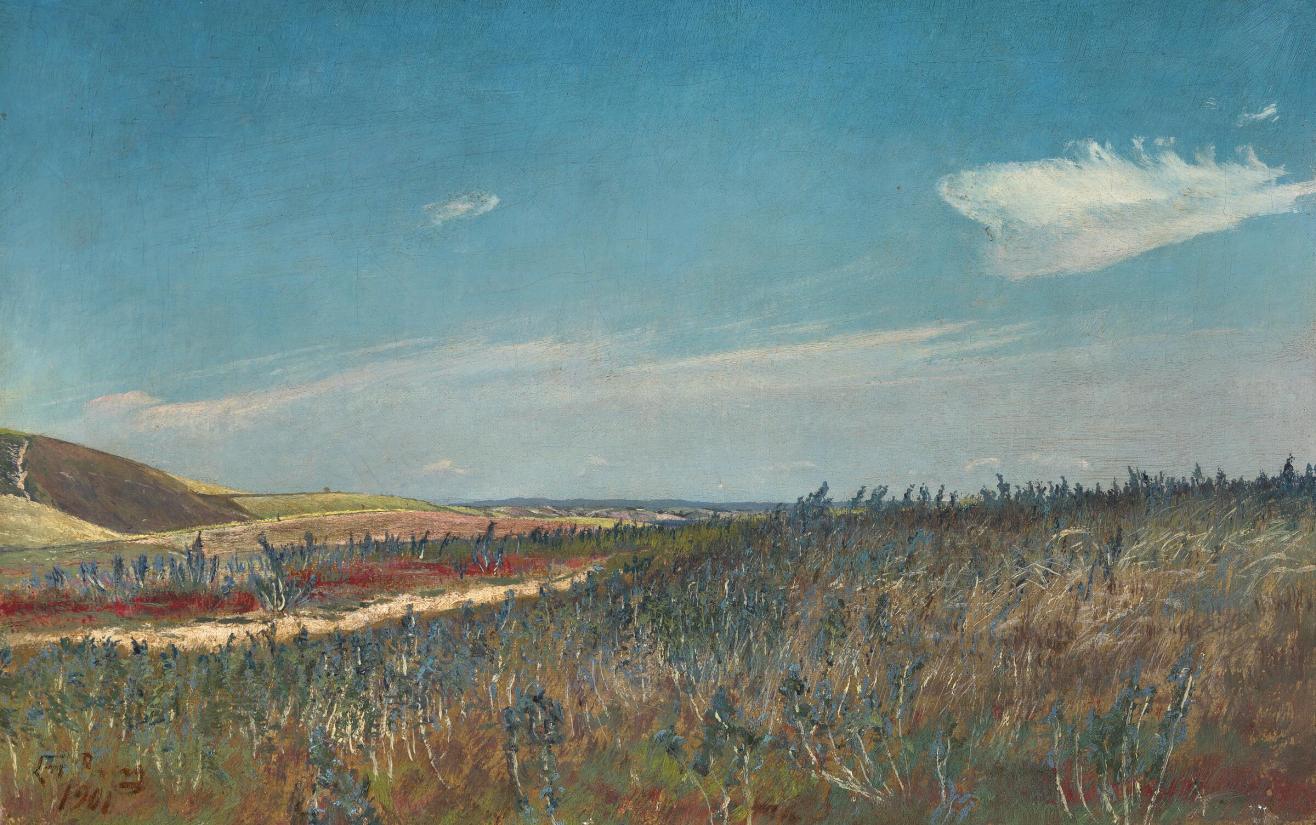 Mark med blomstrende slangehoveder (Field with flowering viper’s bugloss) from 1901 was painted in Frederiksværk, where Ring and his wife, Sigrid, lived for a few years. During their time here, Ring incorporated the North Zealand landscape and its special light into his work. This was a formative period for the artist’s landscape paintings, as he embraced a wider scope, more intense colouring and a more tactile feel in an expression that stands in contrast to his earlier work.

In this painting, Ring captures the wild character of the landscape. The wide horizon extends into the distance, while the foreground is dominated by an untamed field landscape with blue flowers, so-called viper’s bugloss. The artist imbues the painting with intensity through his choice of colours, as he contrasts the blue of the flowers with the reds and browns of the soil. Foreground and background also stand in contrast to one another. The depiction of the blue sky is razor-sharp, with a degree of detailing that is characteristic of Ring’s work, while the foreground is characterized by expressive brushstrokes à la Van Gogh. With this contrast, Ring almost seems to point to an inner schism between tradition and modernity in his own identity as an artist.

Ring is known mainly for paintings from his own native region near the town of Næstved in South Zealand: unsentimental paintings of local farmers, craftspeople and workers from the area as well as paintings of interiors and of the surrounding landscape. In his art, Ring moved between realism and symbolism. A preoccupation with his own, sometimes melancholic inner life is also reflected in his work, including in his landscapes, which often have a personal, soulful expression.

The new acquisition will be included in Øregaard Museum’s anniversary exhibition, ‘From here our world extends’, which opens on 9 October.

Laurits Andersen Ring (1854–1933) was born to a family of limited means in the town of Ring on South Zealand and later chose the name of his hometown as his adopted last name. He became a painter’s apprentice in the town of Præstø but was later accepted into the Royal Danish Academy of Fine Arts in Copenhagen. In many regards, Ring’s work reflects an easy access to the darker aspects of life. That is evident both in his unvarnished scenes from life in the country and in his inclusion of death as a recurring theme. However, when Ring married the twenty years younger woman Sigrid, daughter of the ceramic artist Herman Kähler, that changed. A new warm and joyful feeling is expressed in his art, in contrast to the raw realism characterizing his earlier paintings.