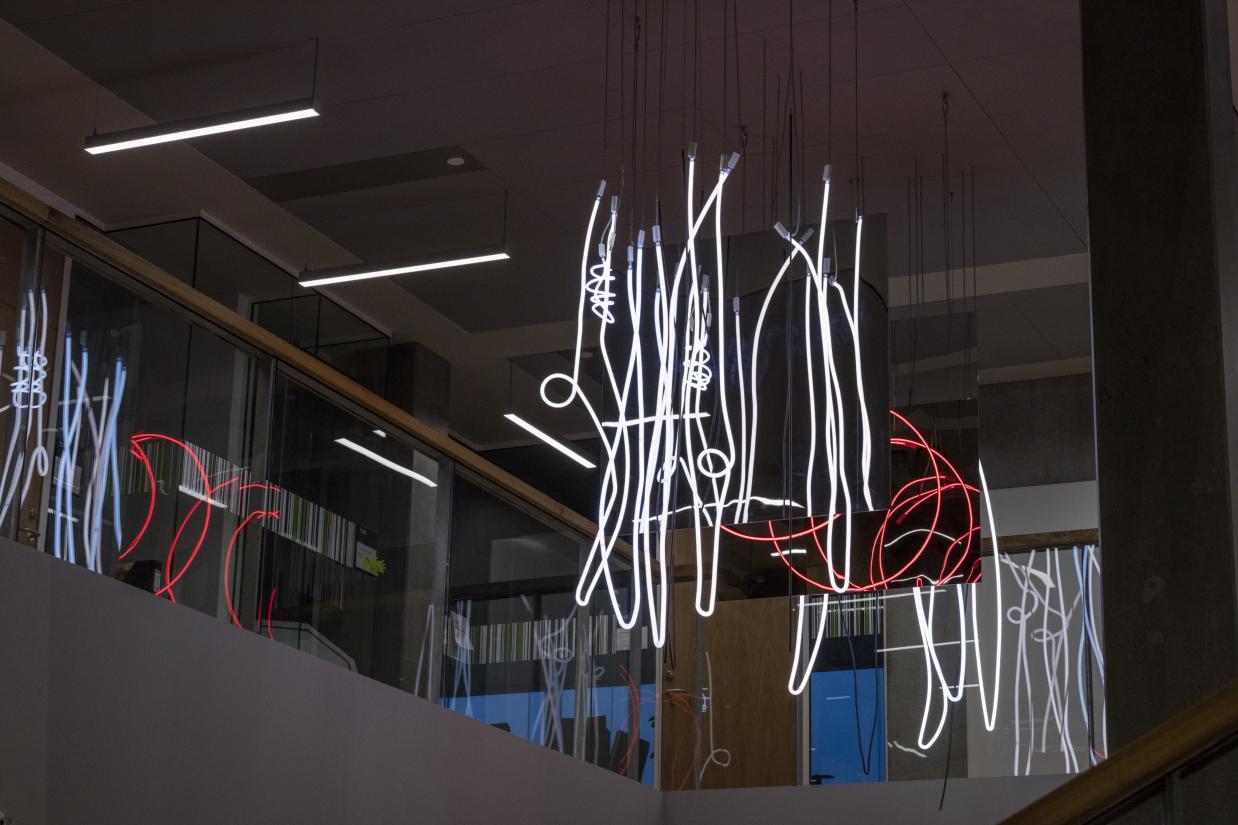 With a generous donation from the New Carlsberg Foundation, Gun Gordillo has created a site-specific art installation for VIA’s new administration building in Aarhus. Since August 2017, the new head office has served as the daily workplace for about 100 employees working with management, finance, HR, legal matters and communication.

Different experiences from different vantage points
‘VIA’s administration building is a transparent structure, with a lot of glass, that is cut through by a diagonal staircase; inside, the middle of the building offers a free view of all four storeys due to the staggered planes. The vision behind my artwork was to use the free space within the building to create an art installation that extends over three storeys,’ Gun Gordillo explains, and adds:

‘I have worked with lights, reflections, steel forms, gravity and lightness in order to generate a variety of dialogues, where different vantage points offer different experiences.’

Throughout the day, the neon lights are going to engage in an ever-changing interplay with the daylight. Gun Gordillo is known for artworks that combine differently coloured neon lights with hard, durable materials, such as lead, copper, zinc and aluminium, as well as fragile elements such as glass, acrylic and Plexiglas.

A generous installation
‘The New Carlsberg Foundation aims to promote the presence of art as a part of everyday life throughout society. VIA’s new building is in itself monumental, almost beautiful, in its unique architecture. Gun Gordillo’s generous installation makes the building that little bit more welcoming thanks to the gesture implied in a work of art. No doubt, Gun Gordillo’s beautiful work will be an immediate and daily source of joy for both the staff and the many visitors to the building,’ says Morten Kyndrup, member of the New Carlsberg Foundation and professor (chair) of Aesthetics and Culture at Aarhus University.

Matching the new architecture
‘We feel incredibly privileged to have the VIA administration building decorated with an installation that is created specially for the building and thus a perfect match for the architecture and the interior. And we are deeply grateful to the New Carlsberg Foundation for donating this work of art,’ says Pro-rector Peter Friese of VIA University College.

Light, colours and an imaginary mirror space
On the fourth floor of VIA’s new administration building, Gun Gordillo’s installation features a laser-cut component in blue steel and a line drawn in neon light, both elements suspended in wires from the ceiling and engaging a mutual dialogue between gravity and lightness.

From the ceiling of the third floor, a horizontal progression of light will extend underneath the gallery and into the corridor space, where three-dimensional neon tubes emit light in different shades of white. The neon tubes will be suspended from wires to allow for movement in three dimensions. On the opposite side of the third floor, there will be a small three-dimensional mobile in orange neon attached to a stainless-steel pole that extends into the space.

Finally, the second floor, which houses the reception and entrance to VIA’s administration building, is going to feature an imaginary space created with the use of two double mirrors suspended from wires underneath the overhead gallery. The mirror sheets will be flanked on both sides by free-hanging vertical forms in neon and steel tubes that are reflected in the nearest mirror sheet. A free-hanging three-dimensional red neon form will generate a host of reflections.

Facts about Gun Gordillo
Gun Gordillo was born in Lund, Sweden, in 1945 and attended the Royal Danish Academy of Fine Arts in Copenhagen in 1969–1975. She has exhibited with Galerie Denise René in Paris since 1985 and is also represented by Last Resort Gallery in Copenhagen.

For more than 40 years, Gun Gordillo has worked with neon lights, often in combination with lead, stone and metal and frequently with the addition of acrylic sheets or mirrors as a means of creating spatial effects. Her works thus give rise to a dialogue between gravity and lightness.