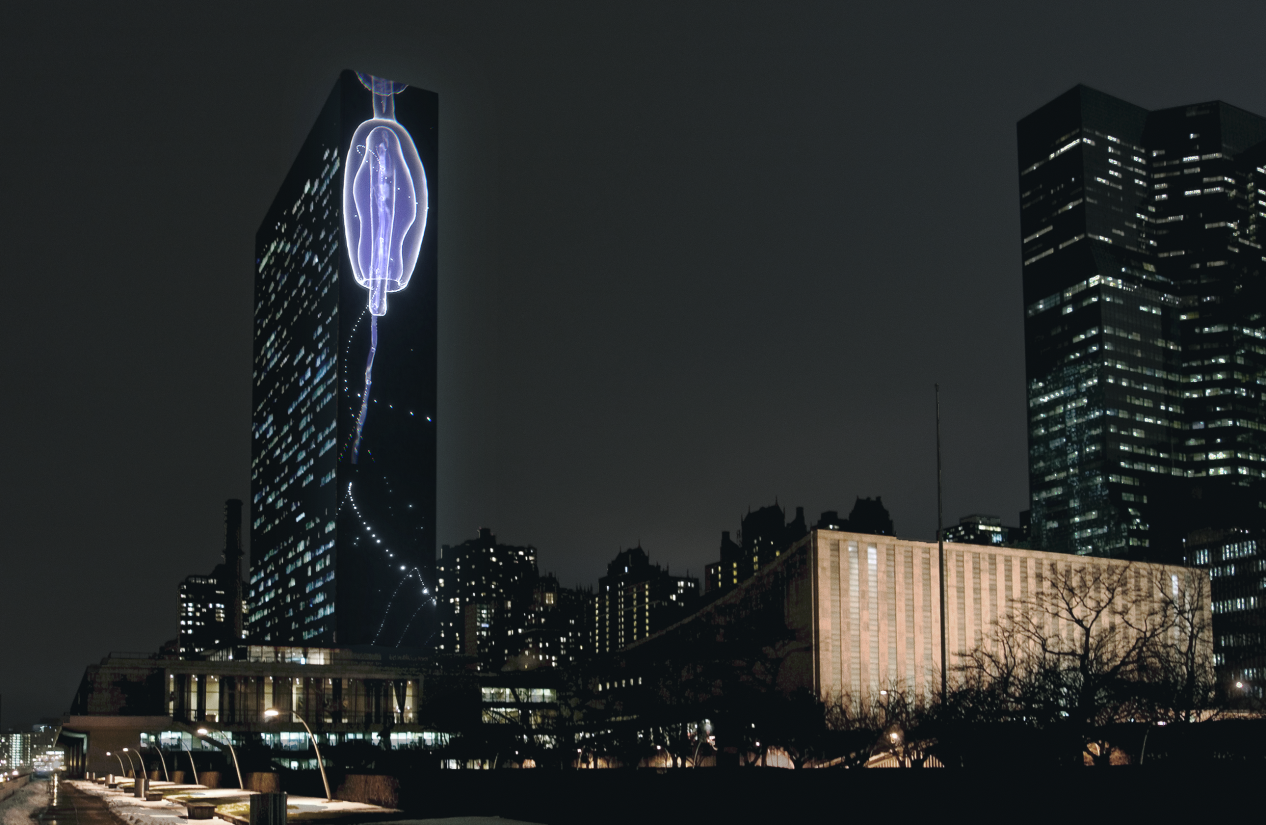 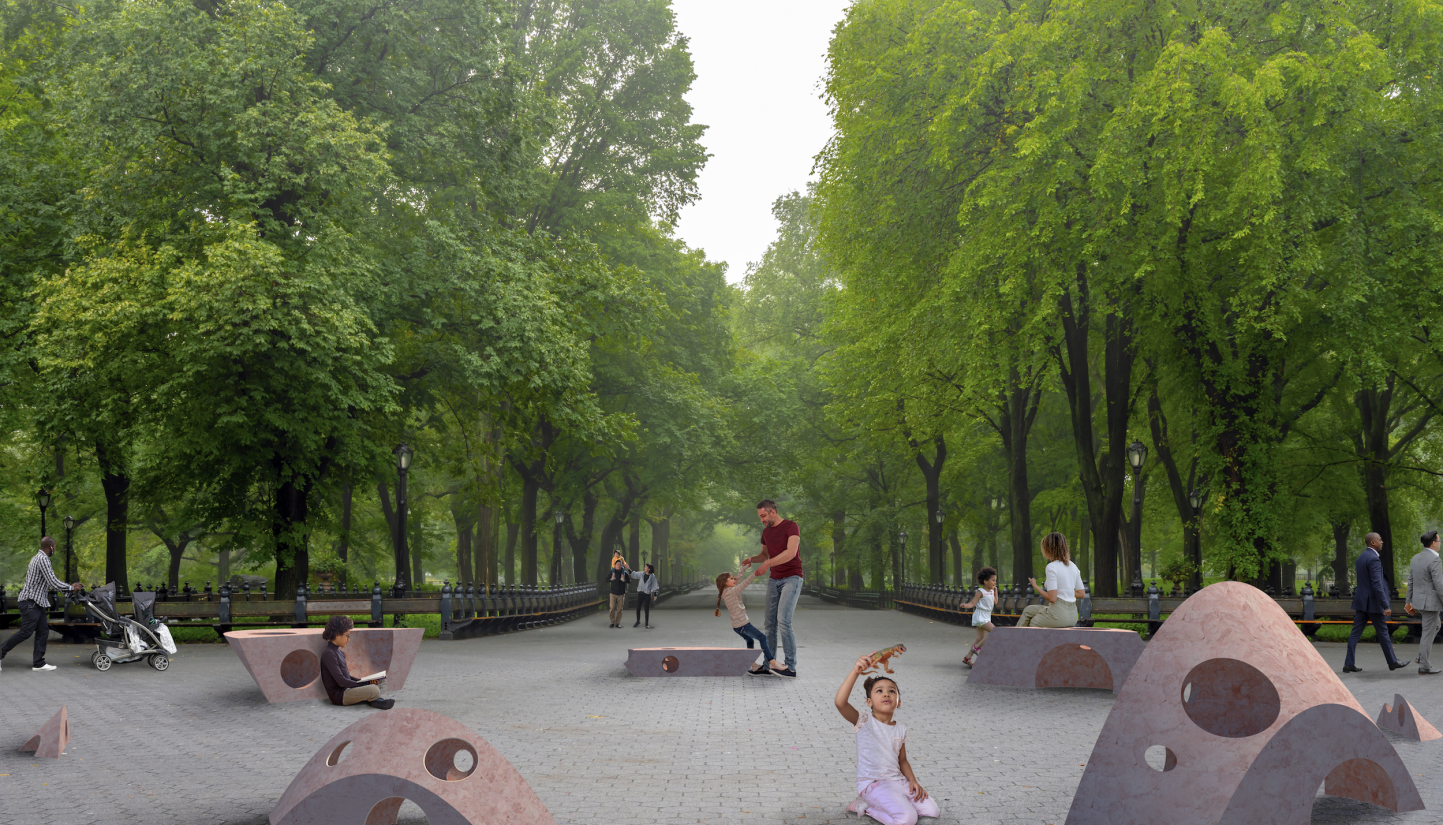 Sea levels are rising, the oceans are getting warmer, and marine ecosystems and species are endangered. With the project Interspecies Assembly SUPERFLEX confronts the profound and devastating effects of climate change with equal parts humour and seriousness in artistic climate statements that offer a preview of a possible underwater future. The presentation of the project coincides with the 76th session of the UN General Assembly and consists of a supersized film projection and a large sculptural installation, both occupying prominent locations in the urban space of New York City.

Vertical Migration is a 145-metre-tall video installation that focuses on the importance of the world’s oceans for climate and biodiversity. Every night from 20.00 to 23.00 during the exhibition period, a new representative of underwater life forms will visit the UN building in Manhattan. In giant form, the visitor of the day occupies the entire marble-clad north facade of the 39-storey building.

The films highlight different types of siphonophores – fragile, gelatinous marine organisms that live in colonies, like corals. Instead of a single animal, siphonophores consist of many bodies that work together as a collective to ensure their common survival. This makes them a fitting metaphor for what it will take for humanity to turn the tide on climate change.

Interspecies Assembly is an installation of coral sculptures placed in Central Park, just south of the Metropolitan Museum of Art. The sculpture group incorporates forms, colours and textures that are suited for a thriving and biodiverse marine life after the big flood. In Central Park they are arranged as a sort of meeting place where humans and marine organisms can meet and coexist.

In a collaboration between SUPERFLEX and Google Arts & Culture, Interspecies Assembly has been translated into digital form in parallel with the showing in New York. The digital platform is launched on 17 September at g.co/siphonophore

The artist group was formed in 1993 by Jakob Fenger, Bjørnstjerne Christiansen and Rasmus Nielsen. Since its inception, SUPERFLEX addresses our current reality in tangible manifestations. From a collective and activist perspective, their projects often engage directly in social and political situations. Whether in critical interventions in relation to big multinational corporations, artistic comments on the current climate situation or the involvement of the multi-ethnic community in Copenhagen’s Nørrebro district in the design of a new urban space, their projects often take on major social topics and challenges. SUPERFLEX has exhibited all over the world, and the artist group’s work is represented in numerous collections and museums in Denmark and abroad.

Vertical Migration, 2021
Animation film. Duration 20 mins.
Shown in a loop as a 145-metre-tall video installation on the north facade of the UN Headquarters in New York City 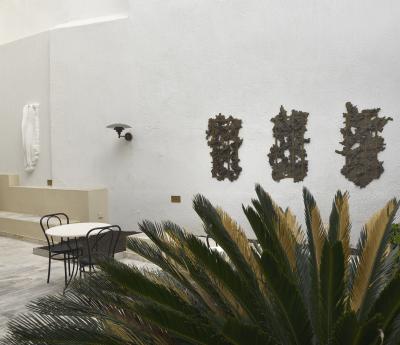 With Nu, hvor ingenting er, hvad det var – om forvandling og eksistens (Now that nothing is what it was: About transformation and existence) the Danish sculptor Veo Friis Jespersen has created a series of poetic reliefs for the courtyard garden of the Danish Institute at Athens. The decorative project was realized with support from the New Carlsberg Foundation.