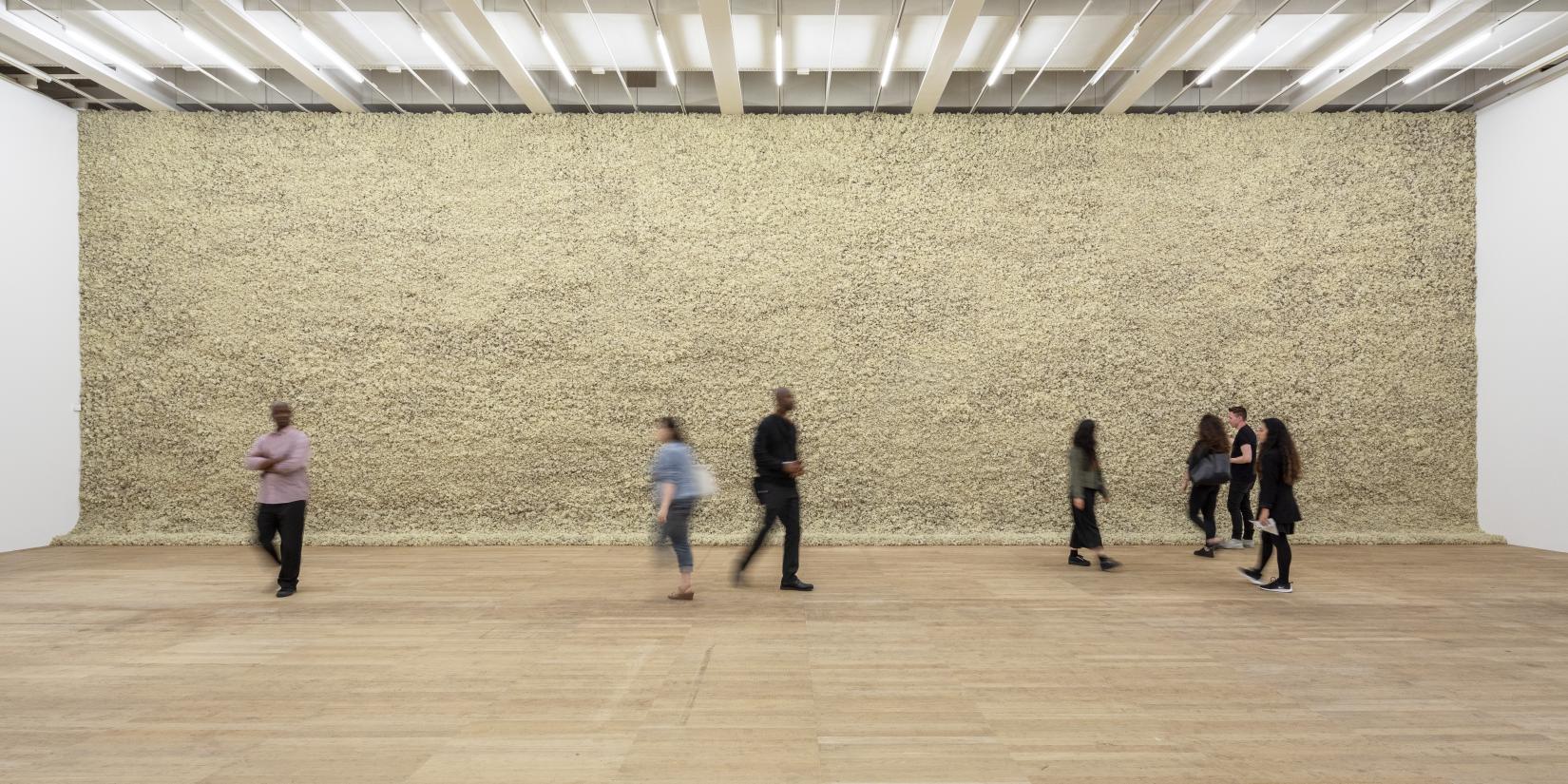 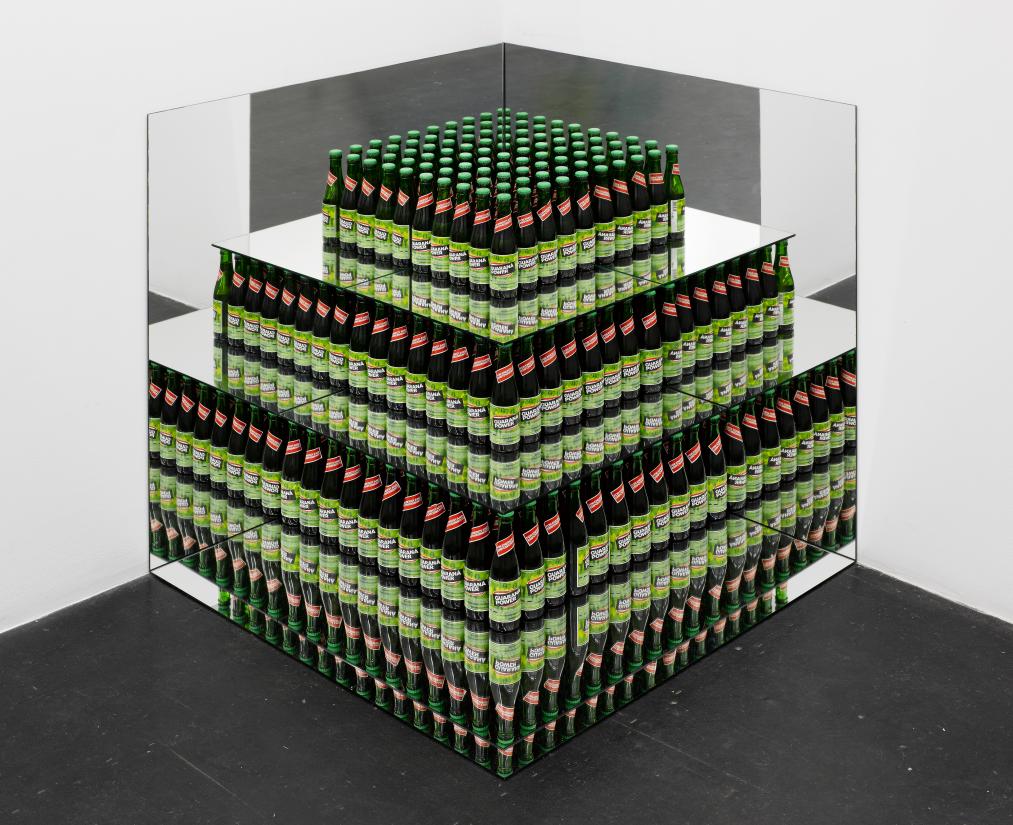 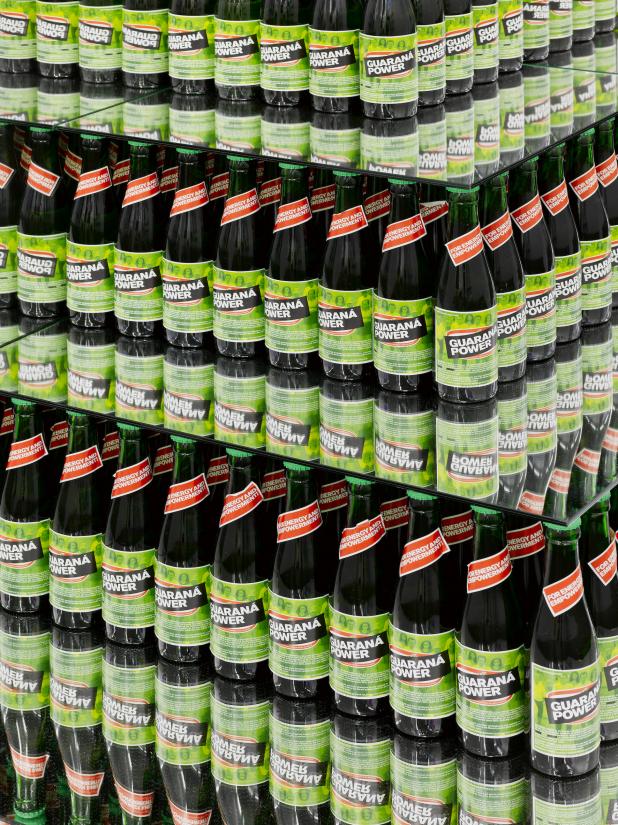 Moss wall is one of Olafur Eliasson’s early work but is considered a principal piece by the artist himself and occupied a central position in Tate Modern’s big retrospective exhibition ‘Olafur Eliasson: In Real Life’ in 2019. Moss wall was Eliasson’s first use of incorporating nature in the exhibition, on a grand scale, as a sort of readymade. Specifically, in this case, in the form of a particular type of moss that grows in northern latitudes, including in Iceland’s lava fields.

From insignificant to amazing

In terms of its visual appearance, moss is among the more unassuming plant species. But in typical fashion, Eliasson re-enchants nature and natural phenomena in his art, drawing on an exceptional capacity to make the seemingly elementary and mundane startling and insistent. Painstakingly fastened on chicken wire mesh, the moss covers an entire wall. The effect is that of a huge and impenetrable tapestry or a soft wall. At once down-to-earth and monumental. Outdoors turned indoors. In the gallery space, nature becomes strangely present and close; in fact, paradoxically, it is almost more manifest here than in nature itself.

Like Olafur Eliasson, SUPERFLEX also previously exhibited at Tate Modern. In 2017, with support from the New Carlsberg Foundation, the artist group occupied the gallery’s iconic turbine hall with the total installation One Two Three Swing!

Guaraná Power Corner is a more recent piece that springs from the comprehensive Guaraná Power Project. In 2003, SUPERFLEX launched an extensive collaboration with a farming cooperative in Maués, Brazil to develop the soft drink Guaraná Power. The key focus of the project is on issues of self-organization, sustainability and the unequitable power distribution and market conditions that are the result of multinational corporations’ monopoly on the production of guarana, at great cost to many Amazon communities.

In addition to establishing a manufacturing system, the collaboration between SUPERFLEX and the local farmers also involved the development of business models and branding strategies aimed at ensuring a sustainable company. The green bottles, which in the Tate Modern version are stacked into a pyramid display, as in a supermarket, have exactly the same design as Guaraná Antartica, one of the well-known mass-produced energy drinks on the market. The only difference is the cheeky addition of the name ‘Guaraná Power’ in white on a black ‘redacted’ square covering up most of the competitor’s red logo.

The Danish-Icelandic Olafur Eliasson (b. 1967) graduated from the Royal Danish Academy of Fine Arts in Copenhagen. Since the early 1990s he has worked with photography, installation, sculpture and film. His practice, which often combines art, architecture and natural science, revolves around a study of the human senses and how they influence our perception of the world as well as our way of being in the world. Eliasson is represented in museum collections all over the world and has held big solo exhibitions in many leading art museums around the world.

The artist group was formed in 1993 by Jakob Fenger, Bjørnstjerne Christiansen and Rasmus Nielsen. Since its inception, SUPERFLEX addresses our current reality in tangible manifestations. From a collective and activist perspective, their projects often engage directly in social and political situations. Whether in critical interventions in relation to big multinational corporations, artistic comments on the current climate situation or the involvement of the multi-ethnic community in Copenhagen’s Nørrebro district in the design of a new urban space, their projects often take on major social topics and challenges. SUPERFLEX has exhibited all over the world, and the artist group’s work is represented in numerous collections and museums in Denmark and abroad.