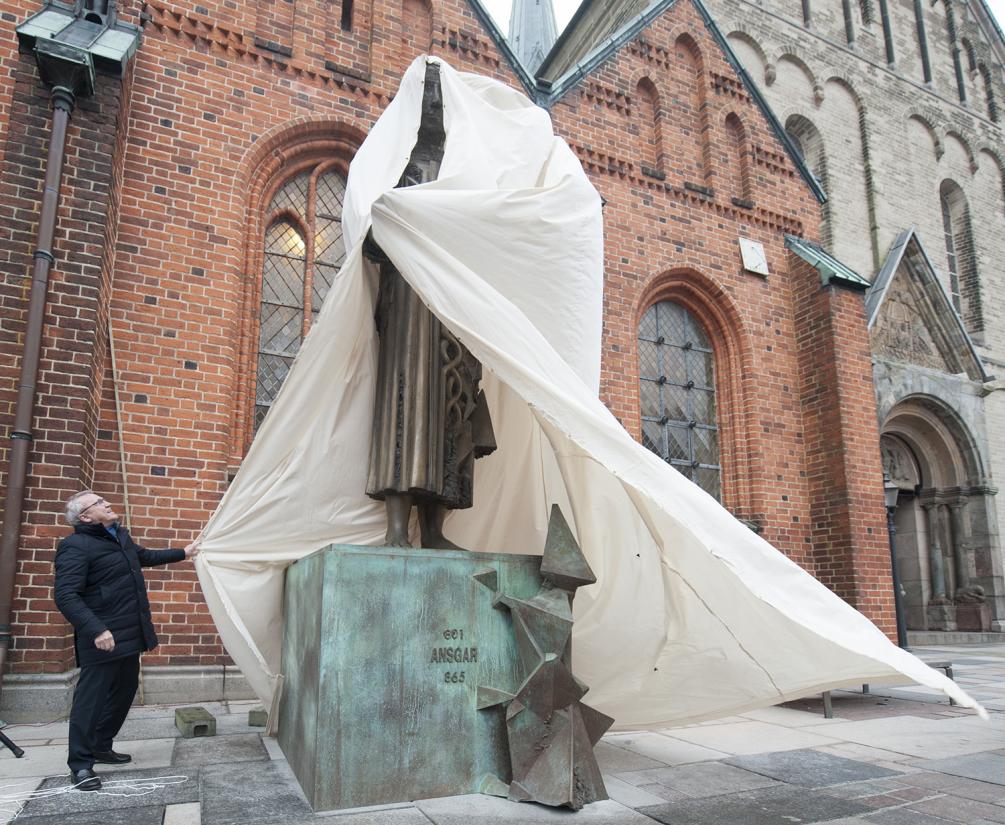 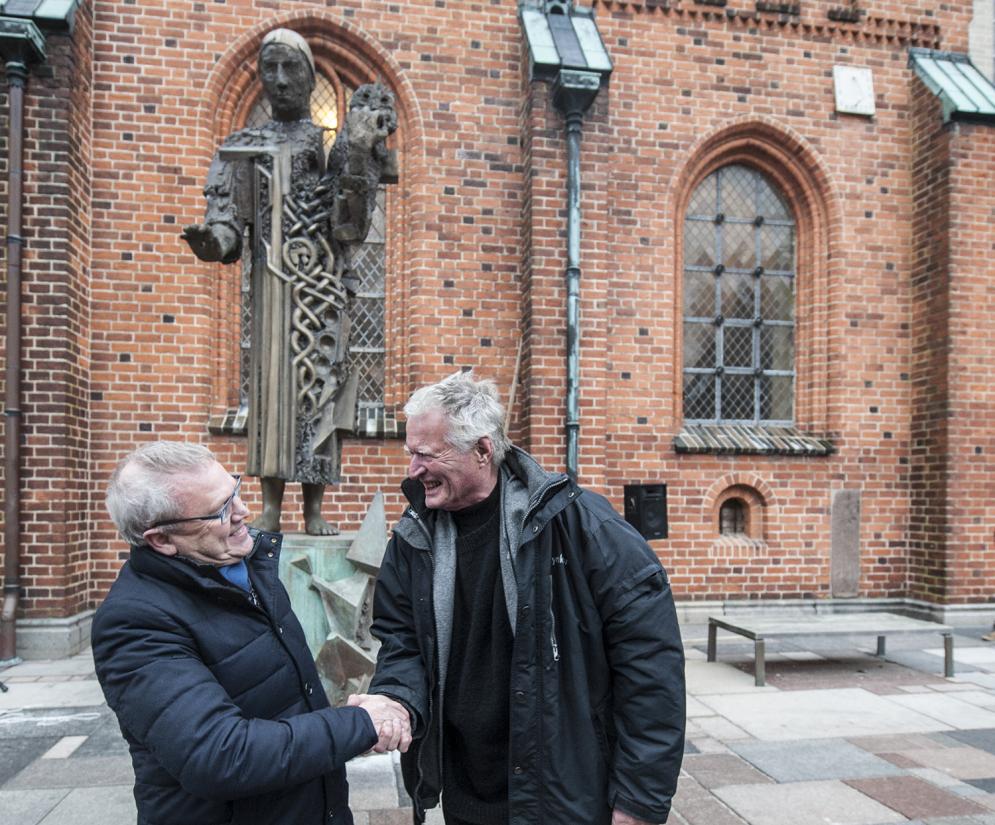 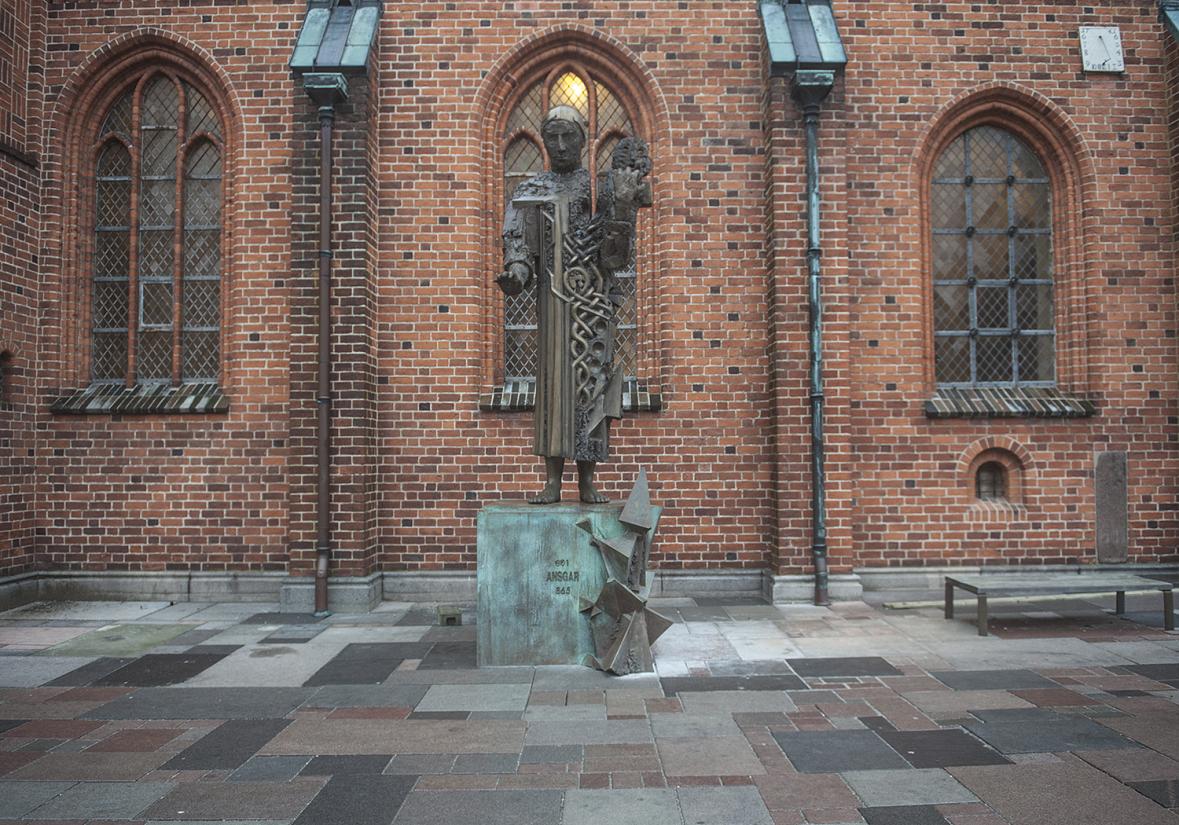 The sculpture has been a long time underway, but now, Ansgar is back in the town of Ribe, where he built a church in the 800s and strove to christen the Danes. The Danish sculptor Hein Heinsen has devoted great efforts to the task, as is evident from the video below about the creation of the sculpture.

The bronze sculpture, which is more than five metres tall, stands on the south side of Ribe Cathedral with a view of Kannikegården and thus the archaeological excavations that have unearthed some of the earliest Christian graves in Denmark. Ansgar is not alone here but shares the space with sculptures of Hans Tavsen and H. A. Brorson.

A divided figure
Hein Heinsen’s sculpture incorporates a division between organically interlaced and vertical elements; a reference to the meeting between the Viking world and Christianity, Hein Heinsen explains.

‘Ansgar came to the Nordic region to christen the Danes, but he did poorly. He was plagued by horrible nightmares. Of failure. Reading about these nightmares made a profound impression on me. It was the struggle between Christianity, with its light and clarity, which is expressed by the vertical elements of the sculpture, and the more complex Viking figures: endless movement with countless twists and turns, which is also found on the Jelling stone, for example.’

A wedge of modernity
Professor Morten Kyndrup, the New Carlsberg Foundation, says about the sculpture:

‘It is literally a greeting from contemporary art, from our own time, which simultaneously points back in time by virtue of its motif, Ansgar, and its site, Ribe Cathedral. It is a wonderful and uplifting thought that Ribe is both willing and able to insert these wedges of modernity into its magnificent mediaeval space. Some believe that respect for tradition is mainly a question of preservation.  But what is merely preserved eventually becomes dead to us. If the old, the outdated, in a sense, is to be visible to us, it cannot stand alone. Tradition, history is reduced to a mere stage set, a backdrop, unless it contains an invitation that gestures us in or up.’