A new-build ruin? That may sound like a contradiction in terms. Nevertheless, that is what the visual artist FOS has created for the upper-secondary school Vestfyns Gymnasium in the town of Glamsbjerg. Based on a donation from the New Carlsberg Foundation, FOS has created Aur(0)a, a work of art that is both humorous and monumental. 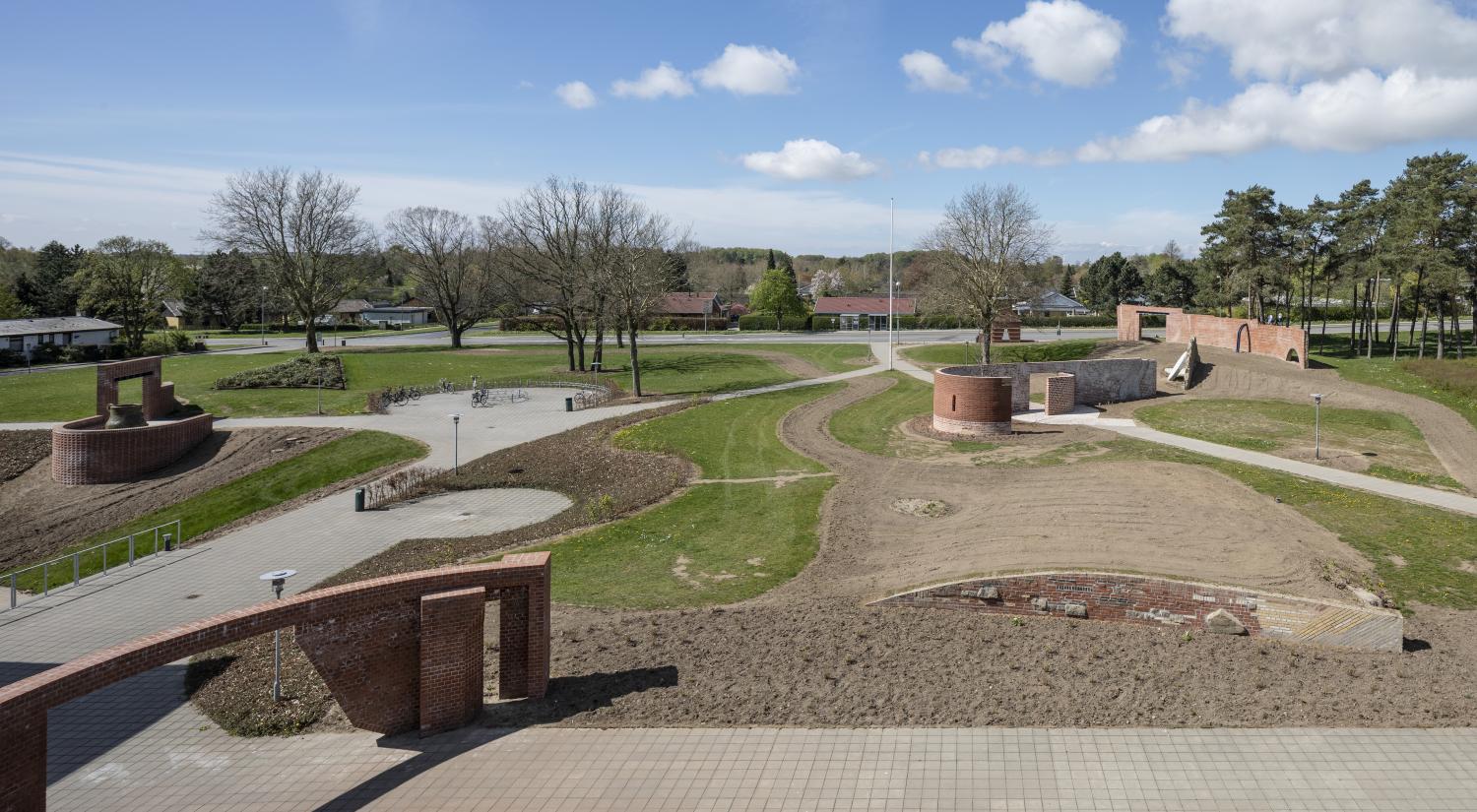 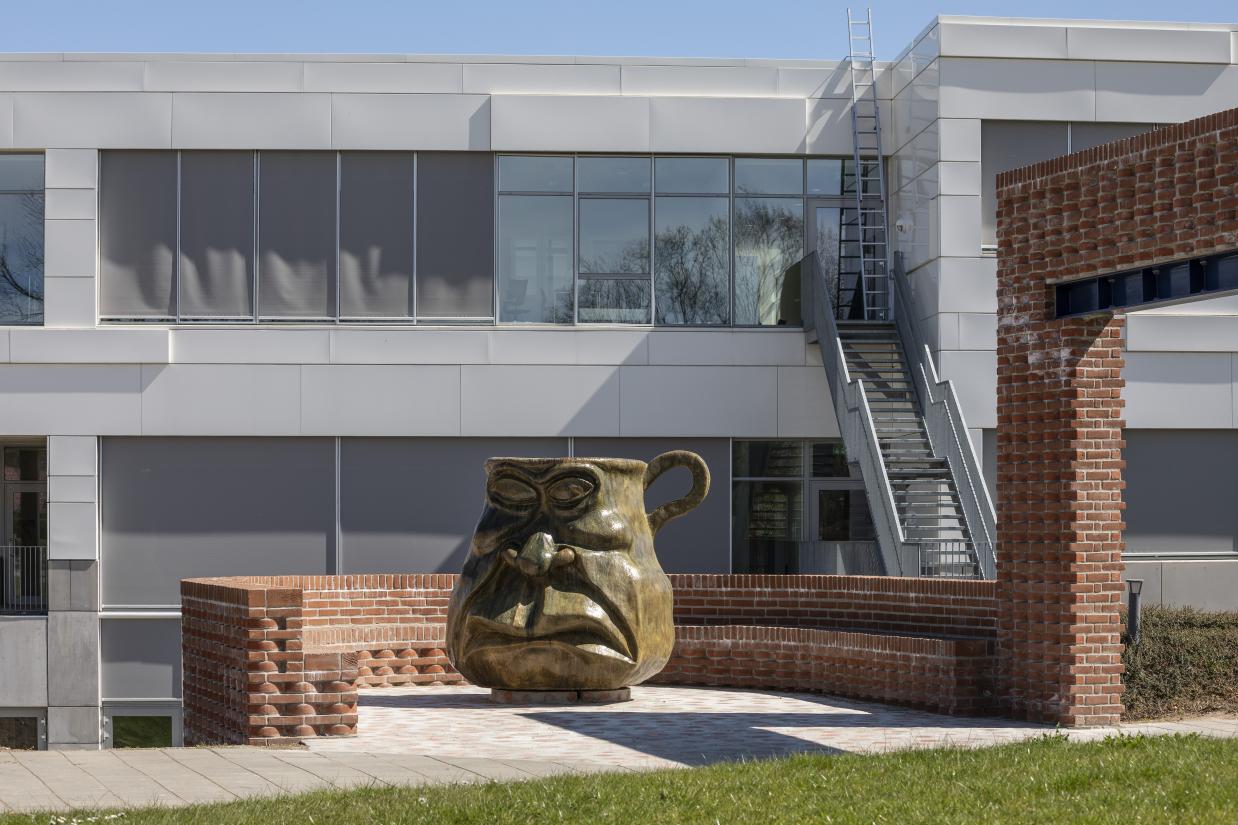 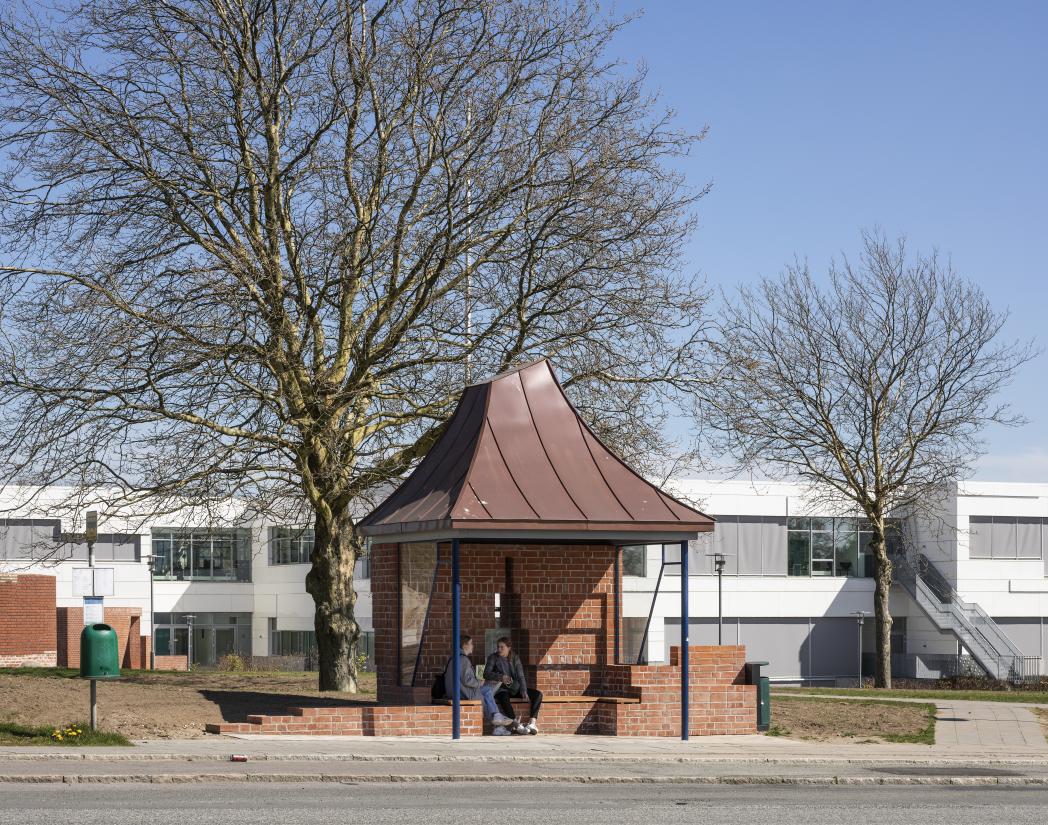 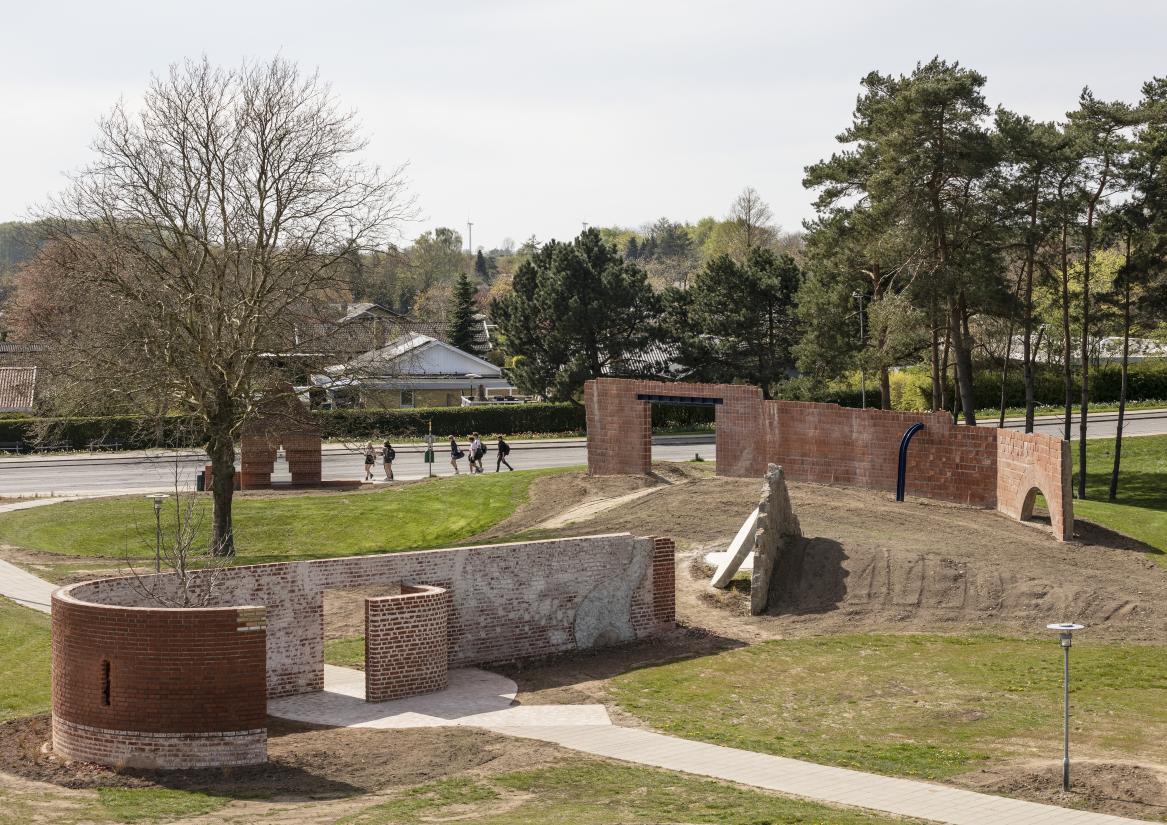 An extensive labyrinthine complex of ruins with wall sections, gateways, tiled and grass-grown paths, a giant cup and a newly established and unique bus stop. With the already hotly debated work Aur(0)a FOS has created a new and unusual space in the town. What was a fairly unplanned, bare lawn has sprouted architectural structures that partition the area in a unique manner and invite reflection, recreation, meetings and activities. A ruin that is not subject to sombre restrictions but instead opens up to new possibilities and experiences.

The use of the ruin as form serves a specific purpose: ‘Sites relate to the past. By creating a ruin we can create a different past, a different history. Seen from above, the walls form the outline of a larger building complex. Like a voice from the past. We might regard this complex as something pre-happened, the aura of something,’ says FOS.

Support from the New Carlsberg Foundation

It was the New Carlsberg Foundation that originally proposed FOS as the artist for this decorative project, just as the foundation has provided support for the realization of Aur(0)a: ‘With his customary inventiveness FOS challenges both the public and the space around them. Aur(0)a is anything but a classic work of art displayed in a frame or on a plinth. It is a platform for social interaction. FOS may have created a work of art, but going forward, it is now the work that creates something. Something that hopefully promotes new relations between art and people as well as among people, and which reaches far beyond the artist’s intention and control,’ says Stine Høholt, member of the board of the New Carlsberg Foundation.

Aur(0)a is the culmination of an extensive collaboration between Vestfyn Gymnasium and the New Carlsberg Foundation. After the school inaugurated its new buildings in 2014, the foundation has donated several works of art by the artists Jesper Christiansen, Eske Kath, Ole Sporring, Henning Damgård-Sørensen, Kirsten Christensen, Jytte Høy and Asmund Havsteen-Mikkelsen.

‘We are very grateful to see the project come to fruition with such an unusual and exciting work as the one created by FOS. In our application to the New Carlsberg Foundation I outlined my vision of making Vestfyns Gymnasium a visible flagship for art on West Funen. It is a great pleasure now to have works of art that provide experiences for the eye and mind – all the way from the bus stop through the park to the interior walls,’ says Ole Toft Hansen, headmaster of Vestfyns Gymnasium.

FOS’s artistic decoration for Vestfyns Gymnasium will be the subject of a comprehensive teaching material developed by the New Carlsberg Foundation. The material will be available (in Danish only) from the learning portal ‘Tæt på kunsten’ (Art Up Close), which the foundation is going to launch this summer. Here, teachers and students from near and far will be able to access the material along with photos and footage designed to be used in courses and projects adapted to the upper-secondary curriculum.

FOS (Thomas Poulsen) typically works at the intersection of sculpture, design and architecture. Rather than regarding art as a closed-off reserve, he creates works that provide a context for new social opportunities and meetings. An example is Osloo, his floating contributing to the Venice Biennale in 2011, or his controversial redesign of the homeless shelter Mændenes Hjem in Copenhagen’s Vesterbro district in 2006, a co-design with his colleague Kenneth Balfelt.

FOS graduated from the Royal Danish Academy of Fine Arts in Copenhagen in 1999 and lives and works in Copenhagen. He is represented in a number of museums, such as SMK, the National Gallery of Denmark; ARoS in Aarhus, Denmark; and Museo Tamayo in Mexico. Over the years he has exhibited widely both in Denmark and abroad. FOS has also received several awards, including the Thorvald Bindesbøll Medal (2018), the ARKEN Art Prize (2017) and an honorary award from the Carl Nielsen and Anne Marie Carl-Nielsen Foundation (2010).