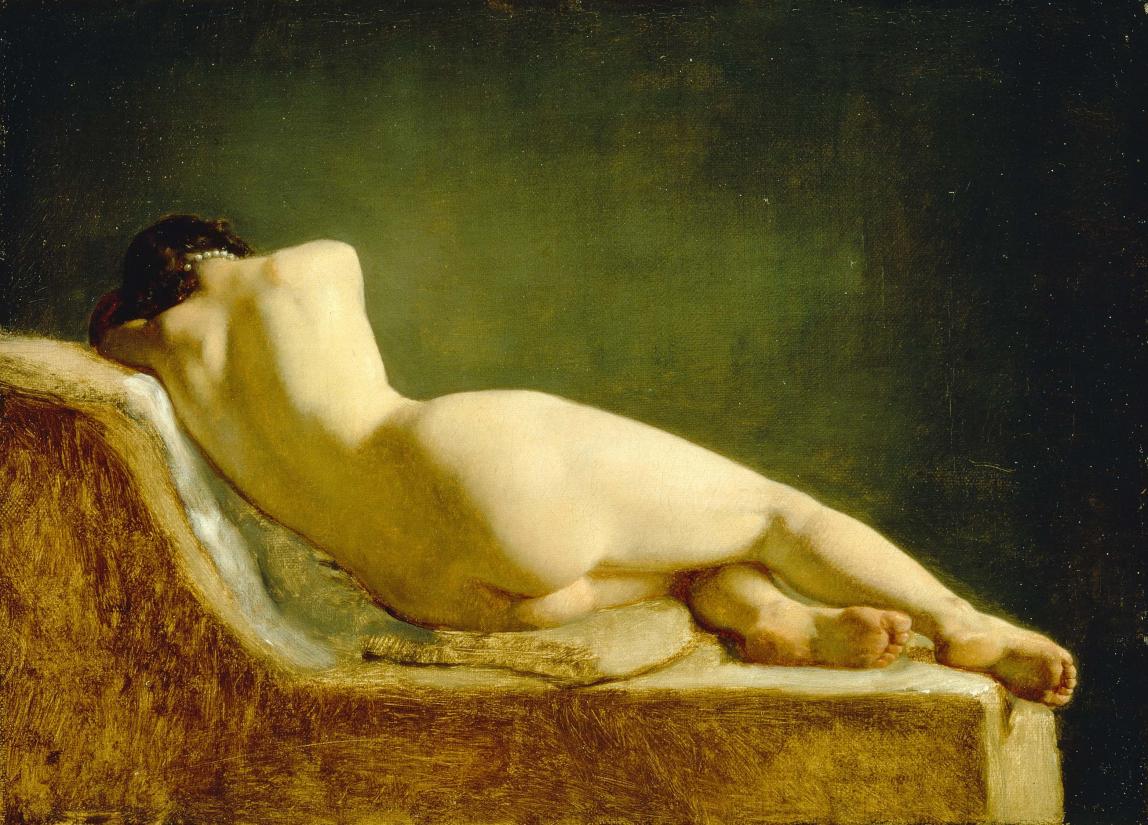 Wilhelm Marstrand is one of the absolute heavyweights of the Danish Golden Age. In 2021, The Nivaagaard Collection presents a large exhibition on Marstrand in collaboration with three other Danish art museums. However, the North Zealand art museum has already begun to warm up for this event, as funding from the New Carlsberg Foundation has enabled the museum to add an early masterpiece by Marstrand to its exquisite collection.

Liggende Model is a little slice of Danish art history in more than one sense. In 1833, a groundbreaking change took place at the Royal Danish Academy of Fine Arts in Copenhagen: for the first time, the Academy’s students could now draw and paint female models. Until then, they had been restricted to male life studies. Thus, in October of that year, some of the most talented students were gathered in C. W. Eckersberg’s studio at Charlottenborg Palace, which houses the Academy to this day, all painting the same woman, viewed from the back.

Marstrand’s painting from this exercise, Liggende Model, is clearly highly accomplished. His representation of the woman is sensuous and life-like. Her pose highlights the curves of her body, and her fully averted face only makes the piece all the more compelling. The detailing of the woman’s feet alone clearly shows that even at this early stage, Marstrand mastered the art of conveying the relationship between light and shadow using his paintbrush and palette.

… to a safe-deposit box in Copenhagen

The painting’s recent provenance is clouded in secrecy. Literally. In 1998, Liggende Model and several other paintings from the Danish Golden Age were purchased by a private Swiss collector at a Danish art auction. However, the Danish Commission on the Export of Cultural Assets deemed Liggende Model to be of such national value that it prohibited the export of the painting. In response, the new owner chose to deposit the work in a safe-deposit box in Copenhagen. Despite several attempts by the Commission to purchase Marstrand’s painting, it remained in the box for more than two decades until the Nivaagaard Collection was able to reach a long-term loan agreement with the owner in 2019. And now, the small masterpiece has finally been secured as part of the museum’s collection.

The Nivaagaard Collection already has a considerable collection of works by Marstrand, who incidentally was a close friend of the museum’s founder, Johannes Hage. Liggende Model complements the museum’s collection beautifully, in part by highlighting the connection between life studies and historical paintings in Danish art from the Golden Age. In 2021, Nivaagaard further increases the spotlight on the Danish Golden Age painter with the exhibition ‘Wilhelm Marstrand. The Great Storyteller’ in collaboration with the Danish art museums Fuglsang Kunstmuseum, Ribe Kunstmuseum and the Skovgaard Museum.

Wilhelm Marstrand (1810–73) studied under C. W. Eckersberg at the Royal Danish Academy of Fine Arts in Copenhagen in 1826–33. Today he is considered one of the principal artists of the Danish Golden Age. During his early years, he mainly painted scenes from everyday life in Copenhagen, but after completing his training at the Academy, he travelled to Italy in 1836, following the example of so many of his contemporaries. Marstrand’s paintings from this Italian sojourn reflect his fascination with local street life, which he portrayed repeatedly in various settings, not least in Rome. Back in Denmark, Marstrand soon became a highly regarded artist. Unlike many of the other Danish painters of the Golden Age, he was less interested in topics of a distinctly national character and instead highlighted the importance of transplanting outside influences to Danish soil. His more cosmopolitan profile was further stimulated by additional travels to Rome, Venice and Paris, where he was inspired by some of the great masters, including Rembrandt, Titian and Veronese.