The birth of the Empress statues

In 1885, Carl Jacobsen had the idea of commissioning two marble statues of the Danish King Christian IX’s daughters Alexandra and Dagmar from the famous sculptors Henri Chapu and Jean Gautherin. Princess Alexandra (1844–1925) was married to the Prince of Wales, the later King Edward VII of England, and Princess Dagmar (1847–1928) was married to Tsar Alexander III of Russia.

Carl Jacobsen’s personal involvement
The two sculptors are depicted in conversation with Carl Jacobsen in P. S. Krøyer’s well-known picture ‘Et Aftenselskab i Glyptoteket’ (A soirée at the Glyptotek) from1888. Carl Jacobsen wanted to add the two empress statues to his rapidly growing art collection in order to make it an even more attractive gift to the City of Copenhagen. In return for this donation, Carl Jacobsen demanded that the city make a suitable site available for a new building for the Glyptotek. His correspondence with the two artists tells the story of the creation of the empress statues and of the personal interest Carl Jacobsen’s took in the sculptors’ work. 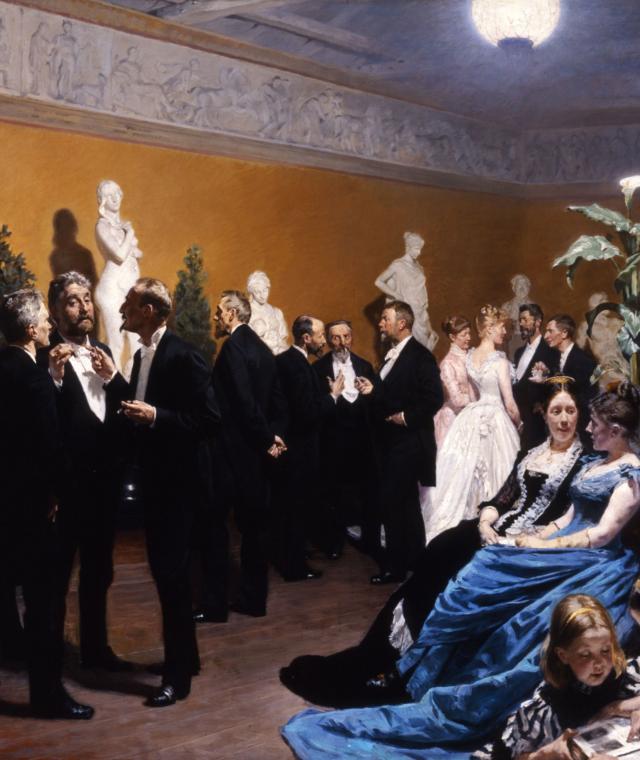