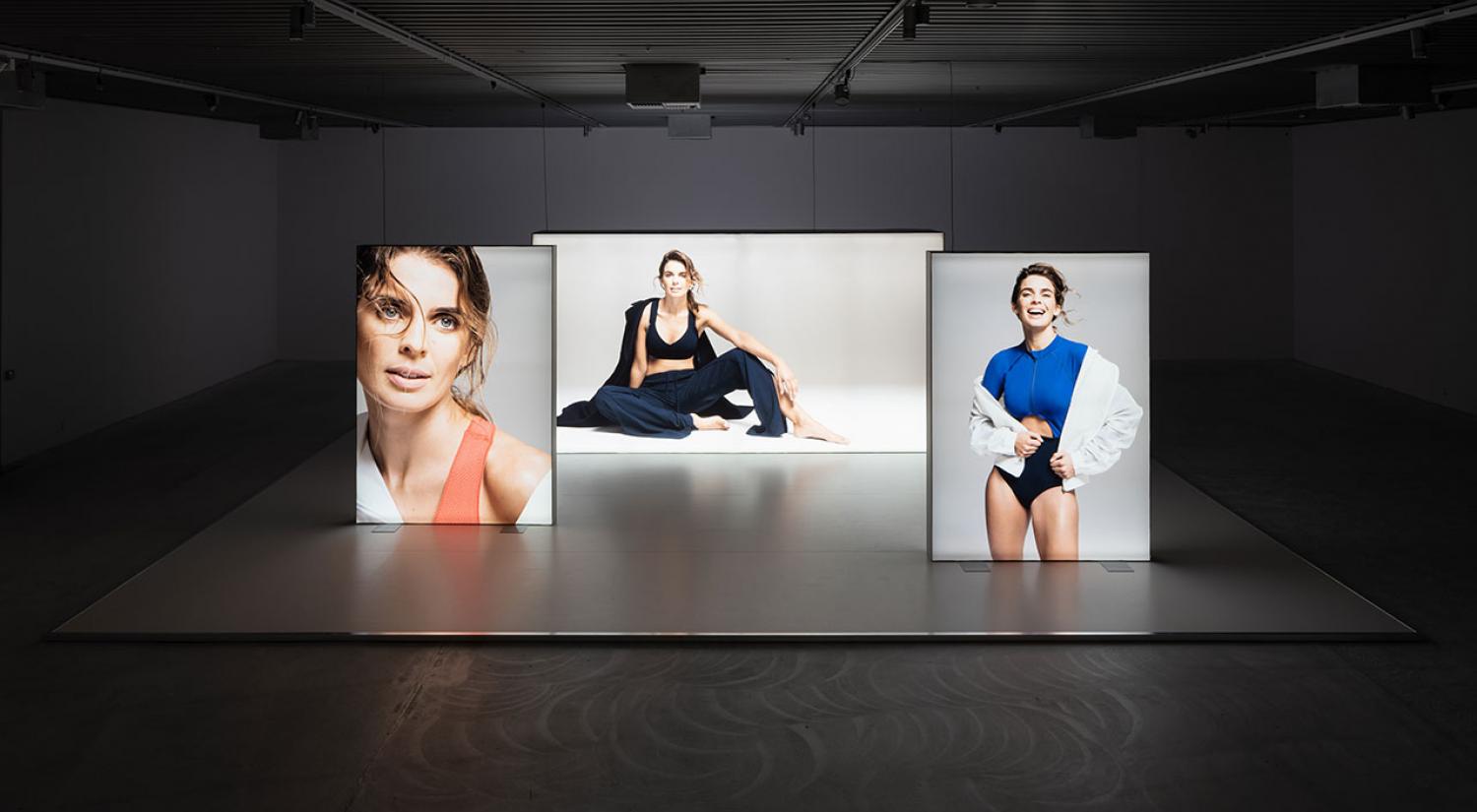 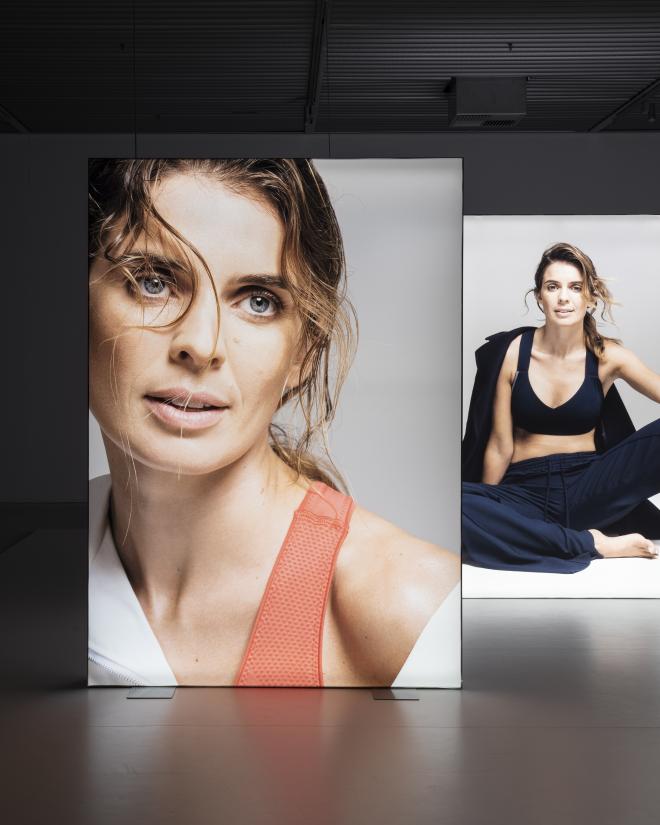 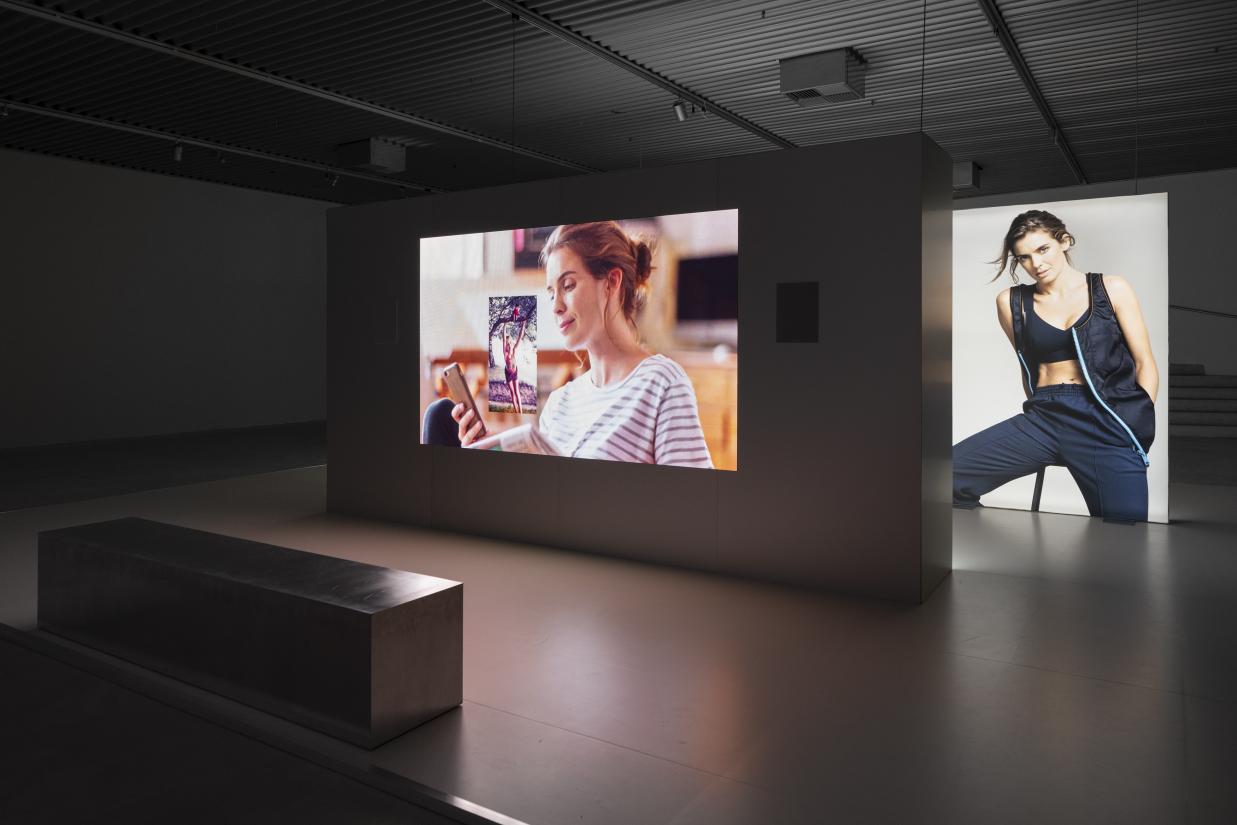 She is a boxing champion, former beauty queen, actress, artists, woman and, in her own words, a chameleon. Simon Fujiwara’s extensive video installation Joanne from 2016/18 shows the many faces of the artist’s former teacher Joanne Salley. The installation takes the viewer on a

kaleidoscopic journey into what appears to be Joanne Salley’s lifeworld through documentary clips, hand-held smartphone videos and glimpses of advertising shoots with Salley modelling.

The newly acquired video installation, which is currently being shown at ARKEN, consists of a 12-minute video and three advertising columns with a streamlined, commercial shopping centre expression. In the film the viewer meets Joanne Salley, who became the victim of a tabloid newspaper scandal in England after students from the prominent boys-only Harrow School in London where she taught discovered and circulated topless photographs of her. The incident ruined her career and public image. With inspiration from Salley’s fate, the consumer industry and the media’s manipulative effects Fujiwara explores the possibility of restoring Salley’s public image. Joanne Salley plays the lead role as herself but also as the human brand to be sold, fashioned and staged.

The power of images

Joanne is a principal work in Fujiwara’s diverse practice and a seductive and alarmingly concrete illustration of the power of images. A ubiquitous issue in a society where identity, self-images and self-fashioning increasingly shape our online lives. Now, ARKEN can add Fujiwara’s installation to its collection of Danish and international contemporary art, and Joanne is already on display at the museum in Ishøj, south of Copenhagen, until 1 November.

In his works, Simon Fujiwara (b. 1982) examines the inherent conflicts in image building and storytelling, from social media and self-presentation to marketing and history writing, and reveals the complexity and paradox of our parallel quests for self-fashioning and authenticity. Fujiwara works across media, from sculpture and installations to video and painting, and draws inspiration from a diverse range of sources, from advertising to archaeology. He has held numerous solo and group exhibitions and is represented in several museum collections, including at Centre Pompidou in Paris and at MoMA and the Guggenheim Museum in New York.