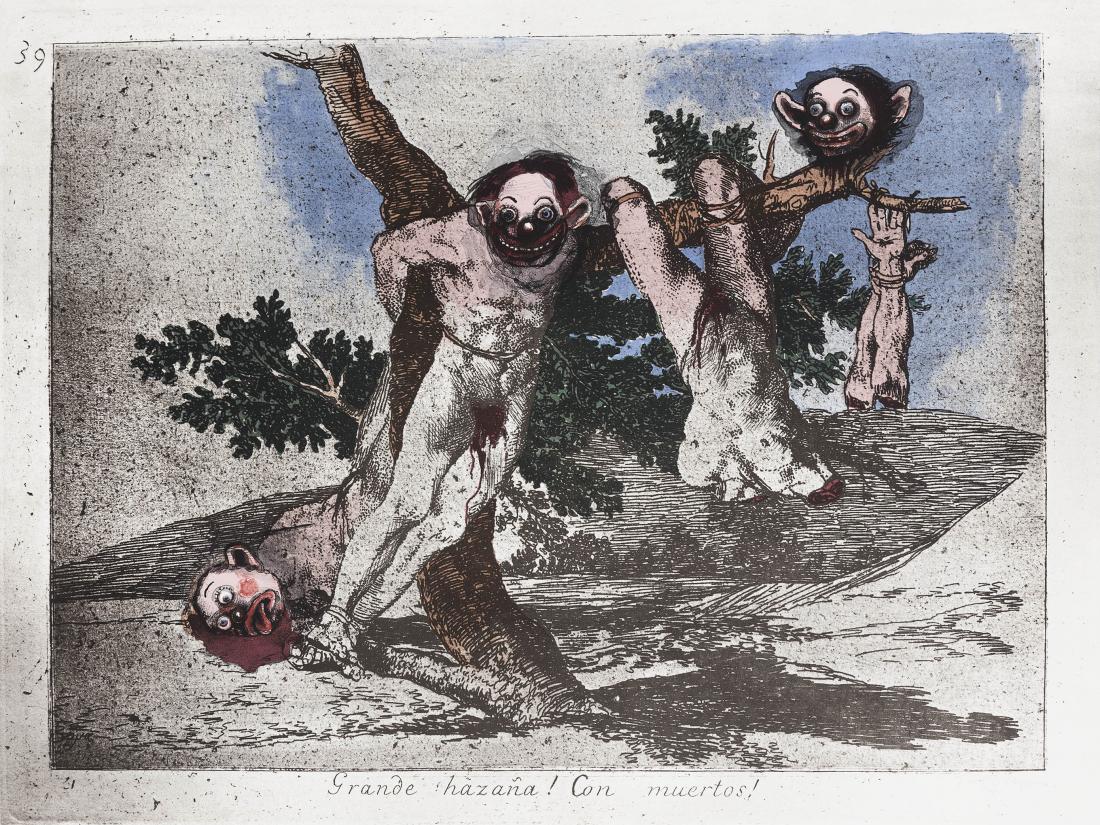 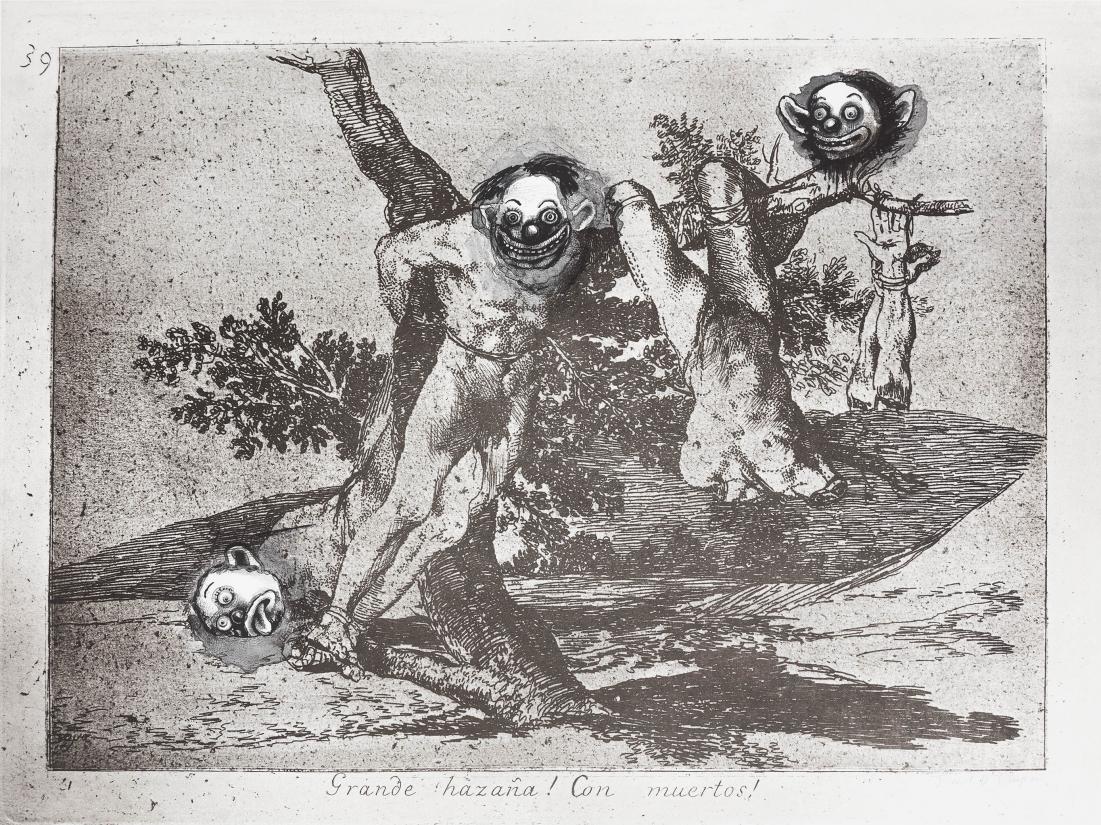 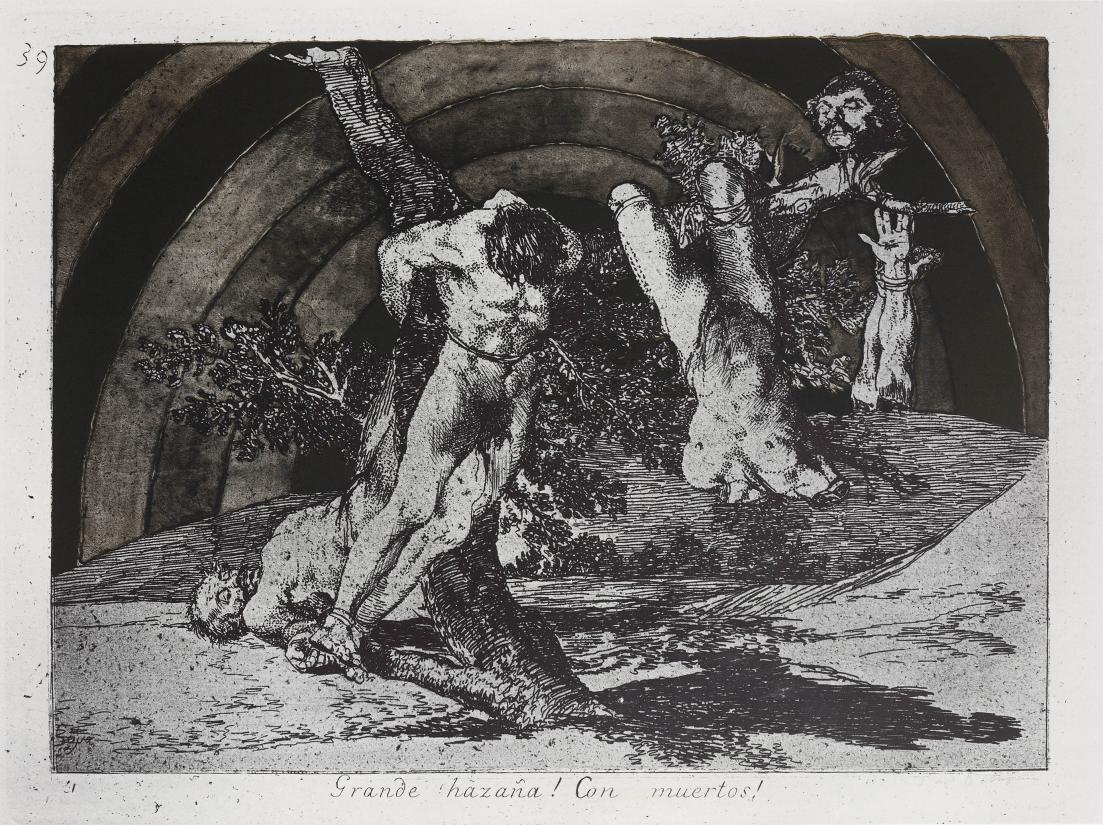 It is one of the horrifying images from Francisco Goya’s print series Los Desastres de la Guerra (The Disasters of War) (1808–15) that Jake and Dinos Chapman have taken on. The Chapman Brothers’ so-called rectification has been carried out directly on three rare reprints of the work that were made in 1937 using Goya’s original printing plates. The brothers have thus directly interfered with an original work of art, adding a new layer. In one of their three versions of Grande hazaña! Con muertos (A Heroic Feat! With Dead Men!), which is also the title of Goya’s original work, they have added a rainbow. In the two others they have erased the victims’ faces and replaced them with clown’s faces. This dramatic intervention is as conceptual as it is physical. The raw violence of war, which is portrayed in Goya’s print, is intensified and redoubled in the Chapman Brothers’ almost violent treatment of the prints.

A violation of Goya?

Jake and Dinos Chapman have been criticized for vandalizing Goya’s print of mutilated, tortured and castrated victims. However, modifying other artists’ works is not a novel invention. One Danish example is Asger Jorn. In Parisian flea markets, Jorn bought and painted on top of older paintings to create his so-called modifications. In a similar style, the Chapman Brothers push the boundaries of art with their additions to Goya’s prints.

Goya originally created the prints in a response to Napoleon’s invasion of Spain in 1808. Jake and Dinos Chapman pick up the baton, equating Napoleon’s mission of spreading the ideas of Enlightenment throughout Europe to George Bush and Tony Blair’s statements about promoting democracy in connection with the Iraq war. Current violence is added to Goya’s portrayal, and the Chapman Brothers’ series may be seen both as an assault on and an homage to Goya’s lithographs.

The universal issue of war

The Chapman Brothers are far from alone in drawing artistic inspiration from Goya’s work. Like Goya, the Danish artist Richard Mortensen, who is also well represented in Esbjergs Art Museum’s collection, reacted to the violence of his own time with the painting Esto es malo; an almost cubist paraphrase on one of Goya’s images from The Disasters of War. The Chapman Brothers’ three etchings are presented from 9 June in an exhibition at Esbjerg Art Museum as a contemporary parallel to Richard Mortensen’s work from the 1950s.

Jake and Dinos Chapman both graduated from the Royal College of Art in London and soon created a stir in the art world, both in the United Kingdom and around the world. Critics often use words like vandalism, taboo, shock and provocation to describe the brothers’ work, and they have become famous – or infamous – under the nickname Les Enfants Terrible. In addition to the Goya print, the brothers have also appropriated and ‘rectified’ other works of art from the 19th and 20th centuries, including some of Adolf Hitler’s original watercolours.